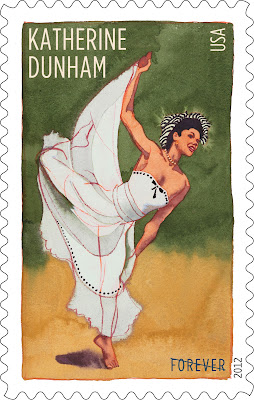 On July 28, 2012, a stamp unveiling ceremony was held at the Katherine Dunham Centers for Arts and Humanities in East St. Louis, Illinois, to honor the life and legacy of Miss Dunham and to debut the Dunham Forever Stamp, which was issued by the U.S. Postal Service (USPS) as part of their Innovative Choreographers Stamp Collection, which also features Isadora Duncan, Bob Fosse, and José Limón.

The stamp showcases Dunham performing L’Ag’Ya, a folk/martial art dance of Martinique. Illustrated by James McMullen, the stamp was designed to look like more like a vintage poster advertisement. While stamps in general may not retain any real market value, they do have a certain cultural value. Although Dunham is not a part of the Black Heritage Stamp Collection, she has made a mark on American postal history and is now a part of the legacy of black women and men who have appeared on stamps, beginning with Booker T. Washington who was the first African American to appear on a stamp in 1940.

Unfortunately, I was not able to attend the seminar and events, but this year’s focus is on Haitian and Cuban influences in dance. The Black-Tie Gala on Saturday, August 4, 2012 will be co-hosted by Ms. Debbie Allen, director, choreographer, and actress from the sitcom “Fame” and Mr. Ron Himes, founder and producing director of the St. Louis Black Repertory Theater.

Moments like these sometimes reinforce or validate the work that you are doing. As a developing Dunham scholar, I am thrilled to know that the U.S. Postal Service has chosen to honor Dunham in this way – it’s been a long time coming.

Danielle Hall is a program coordinator and contributing writer for Black Studies @ SIUE.