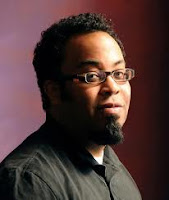 There are many funny poets out there, but over the years, my students have commented on the humor of Amiri Baraka and Kevin Young most consistently. Poems by those two have given us some good laughs. Relatively few students come to the classes expecting poetry to be entertaining so they are often pleasantly surprised by the humor that they discover in works by Baraka and Young.

For Baraka, political satire is a driving force of the humor in his poems. His series of low coup poems, for instance, are short, "dagger-like" pieces that address issues in amusing ways. His poem "In the Funk World" poses the question, "If Elvis Presley is King, who is James Brown, God?" His poem "Memo to Bush 2" goes "The main thing wrong with you is, you ain't in jail." In "Geobolical," Baraka says that "According to the Devil, when he was 1st throwed outta of heaven, He landed in England. I believe Him." Baraka's willingness to mock politicians and ridicule seemingly sacred ideas somehow entertains the students.

Young's humor rests on clever wordplay and his incorporation of blues sensibilities into his works. In his poem "Black Cat Blues," for example, the speaker notes that when he showed up for jury duty, it "turns out the one on trial was me," and to make matters worse, the "Judge that showed up / was my ex-wife." Even in a mostly mournful poem, "Bereavement," for his deceased father, Young infuses a bit of humor with wordplay. He mentions that he's begun to view his dad's dogs as "my father’s other sons, / as kin. Brothers-in-paw."  In the midst of a sad poem, he compels you to smile.

Over the last 20 years in particular, it seems to me that satire, comedy, and entertainment in general have become increasingly prevalent in the cultures and sub-cultures that young adults occupy. The formal study of poetry is viewed by relatively few students as an activity with high entertainment value. I suppose that's one reason that they are intrigued when they encounter the poets' humorous poems.

Baraka's and Young's bodies of work certainly include far more than humor. They both write quite a bit about music and history. Baraka has many poems and essays about black nationalist politics, and Young has written love poems and poems about griefs of loss. Still, part of what has made Baraka and Young notable and memorable for so many of my students has been the view of the writers as funny poets.