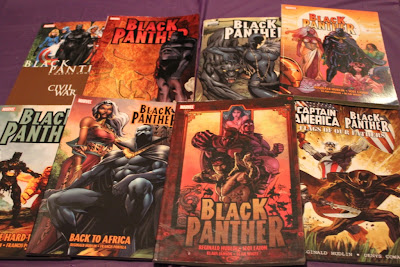 Over the next week or so, I'll complete the entire Reginald Hudlin authored-run of Marvel's Black Panther. I am, relatively speaking, a lightweight comic book/graphic novel reader, so it's been difficult for me finding a way into the expansive universe(s) of various works out there. I've followed folks like Kyle Baker, Keith Knight, Aaron McGruder, and Darrin Bell for some years, but I wanted to read more and in various directions.

One option that came to me was work by director and producer Hudlin, in part because of my connections to East St. Louis and my knowledge that he's from the area.  I decided to catch up on issues of The Black Panther, which Hudlin wrote story-lines for between 2005 - 2008.

I've enjoyed what I've read so far. I've been especially fascinated by the technology capabilities of the Wakandans, the fictive nation where the Black Panther resides. I'm also interested in the references to contemporary historical figures and social issues that emerge in the narrative.

I'm looking forward to checking out the entire run. After that, I'll probably keep going by reading the pre-Hudlin issues of The Black Panther as well as the subsequent issues. I'll also catch up on Rob Guillory's work on Chew. I haven't figured out exactly where I'm going with my expanded readings on graphic novels this area of reading as far as some larger research or black studies agenda. For now, what I'm doing is mostly exploratory.

But for now, it's Hudlin's Black Panther. That's more than enough to keep me busy.