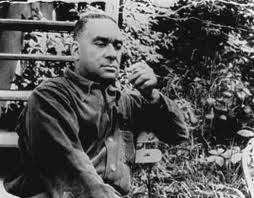 During the last 18 months of his life, Richard Wright composed approximately 4,000 haiku. In other words,
he produced, on average, about 7 haiku per day. The composition of so many works during a condensed amount of time is quite remarkable.

Wright was ill and sometimes bed-ridden during the last year and a half of his life, and writing haiku likely gave him opportunities to keep his mind sharp and stay artistically productive while regaining his health and energy to produce larger book projects. "One of my last memories of my father during the summer and autumn months before he died," wrote Julia Wright, "is his crafting of thousands of haiku. He was never without his haiku binder under his arm."

Haiku: The Last Poems of an American Icon (2012), initially published as Haiku: This Other World (1998), contains 817 haiku that Wright had selected for publication as a book prior to his death in 1960. I sometimes wonder about the 3,183 haiku that did not make the cut.  There's quite a bit of research that says accomplished work is the result of extensive failures, so maybe the success of Wright's 817 haiku was dependent on those other 3,000-plus attempts.

Wright is primarily known as the author of Native Son (1945) and Black Boy (1945)--works that, unlike his haiku, display considerable violence and topics that address racism in the United States. Relatively few of Wright's readers over the years are aware that he wrote haiku. Wright's status as a haiku poet certainly expands, if not alters, conventional views of his as a chronicler of the troubled experiences of black people.

Despite the seeming distance between Wright's early work and his late haiku, I still get the sense that there are connections. In one haiku, Wright goes "The smell of sunny snow / Is swelling the icy air,— / The world grows bigger." His use of the word "bigger" first got my attention because of his most famous character Bigger Thomas from Native Son. It's unlikely that Wright was referring to the character, but the word nonetheless triggers something in the minds of those familiar with Wright's work.

Beyond those connections, however, I try to imagine what it must have meant for Wright or any writer to produce such a large number of even short poems. The composition of one haiku per day for 18 months would require some discipline, so the production of 7 haiku seems incredibly amazing. For decades now, Wright has received recognition as an important novelist and autobiographer; perhaps in the coming years, he might also receive some acknowledgment as a diligent poet.
Posted by H. Rambsy at 9:38 AM