The Mis-Education of the Negro [Book Covers]

We're developing a small library of works for the African American Literatures and Cultures Institute. One of the works I included was Carter G. Woodson's The Mis-Education of the Negro (1933). I noticed when our copy arrived that the cover showed  an image of a young black girl, which was different than the cover I had previously seen  showing a woman with a lock on her head.

As I looked around on the net, I realized that there were several different covers. 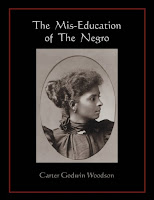 I first read Woodson's book my first year at Tougaloo College in Mississippi. It was "required" reading for all first-year students, though I'm not so sure all students actually read it. There were no reading checks and no public programming related to the work. Still, Woodson's ideas made a solid impression on me and primed me to consider other related ideas in works and concepts that I would encounter.

One of the descriptions that always stuck with me was Woodson's observation that mentally oppressed people would repeatedly confine themselves to inferior positions. Even if there is not a back door in a room that they entered, Woodson noted, many mis-educated black people would create a backdoor exit for themselves in order to avoid going out of the front.

Woodson's book was one of the first thorough critiques I had come across of "educated Negroes," which in this case meant "mis-educated." He offered multiple critiques of the ways that African Americans were socialized to think. His hard tone and willingness to check black folks were good preparations for understanding Malcolm and other militant thinkers.