Diagram of the Slave ship Brooks

In his book The Slave Ship: A Human History, Marcus Rediker explains that "the shipbuilder's diagram of the slave ship Brooks, which showed 482 'tight-packed' slaves distributed around the decks of the vessel, eventually helped the movement abolish the slave trade." 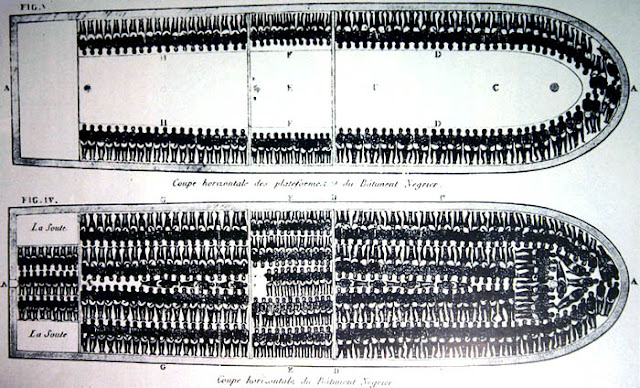 
Making the slave ship real was accomplished in a variety of ways—in pamphlets, speeches, lectures, and poetry, for example—but probably the most powerful means was visual. Abolitionists produced images of the slave ship that would prove to be among the most effective propaganda any social movement has ever created. The best known of these, in its own day and since, was the slave ship Brooks, first drawn and published by William Elford and the Plymouth chapter of the Society for Effecting the Abolition of the Slave Trade in November 1788. The Brooks would be redrawn and republished many times around the Atlantic in the years that followed, and indeed it would come to epitomize the cruelties of the Atlantic slave trade in eighteenth and nineteenth centuries, as well as the many-sided struggles against it. Thomas Clarkson explained in his history of the abolitionist movement that the image made “an instantaneous impression of horror upon all who saw it.” It gave viewers “a much better idea than they could otherwise have had of the horrors of [the Africans’] transportation, and contributed greatly . . . to impress the public in favour of our cause.”

The creation of the image of the Brooks was part of a larger strategy to educate, agitate, and activate people in Britain and America, and indeed anywhere the slave trade went on.