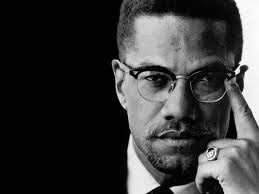 Black men represent a prevalent force in the Malcolm X course that I'm teaching this semester. They speak up, ask questions, read ahead of schedule, and struggle, as one student informed me, to stay within the 3-page limits of an assignment on Malcolm ("there's so much to say.").

I have become accustomed to the strong appeal that Malcolm has for the black men I work with at my university. They're drawn to the audio recordings of Malcolm speaking that I play in class as well as to the speeches that we read.  We haven't talked enough about the images of the iconic political figure, but there's no doubt all the brothers value the different looks of Malcolm.

Last semester and this semester when I taught the course, I was impressed and sometimes amused at how much prior information some of the guys arrived to the Malcolm class with already. Some of the young men felt insulted when there were people in the class who did not know when Malcolm was born, when he died, what religious group he was affiliated with; what group his parents were members of; etc.

There's always talk on college campus about the low-level performance of large numbers of black men. They are necessary conversations to have. I suppose. But perhaps that's another reason the interest of the guys in my Malcolm classes catch my attention. Even a few of the guys who are typically not considered good students at the university find the time and capability to study Malcolm seriously.


Related:
• A notebook on knowledge, creativity, and collegiate black men
Posted by H. Rambsy at 7:50 AM