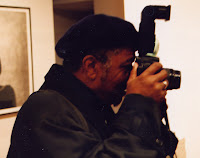 In 1976, Eugene B. Redmond published Drumvoices, his monumental study of African American poetry. Who could've known then that one consequence of that book would have been the development of one of the largest photograph collections of black writers ever assembled? Looking back, in some ways, Drumvoices seemed like preparation for the production of such an extensive collection of images.

Redmond's book covered the works of more than one hundred poets. The process of researching the history of African American poetry had led Redmond to meet dozens and dozens of writers, cultural workers, and supporters of the arts. As a poet, he also shared stages across the country with multiple artists, and his work with the formation of black studies programs provided him to participate in a range of diverse communities.

In 1986, Redmond co-founded the EBR Writers Club in East St. Louis. Although Redmond had been taking photographs here and there for over a decade already, the creation of the writers' club gave him added incentive to provide an extensive visual record of literary activities. In 1991, he became the founding editor of Drumvoices Revue literary and cultural arts magazine. Working with the publication led Redmond to document and publish large numbers of photographs of writers giving readings and interacting with fellow artists.

The photographs in the EBR African American Cultural Life Digital Collection provide a sense of Redmond's extensive photographic work and approaches to collecting materials related to artistic culture over the last couple of decades. The EBR digital collection is a powerful repository of the work that Redmond has been since at least the production of Drumvoices.