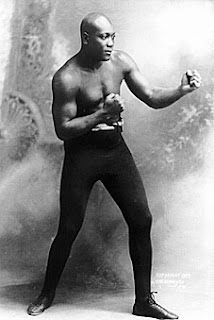 “I spent two years,” said Matejka, “reading biographies and books about boxing and books about African American life at the turn of the century...before I ever wrote a poem.”

As he researched Johnson’s “extraordinary life,” Matejka wondered why “no one has written a book of poems about this guy?” He noticed that a few individual poems had been written about Johnson, but no full-length volumes of poetry had been written. That absence motivated Matejka to produce his Jack Johnson project.

In 2007, he started writing. Many of his pieces were persona poems, written in the voice of Johnson. Matejka's “Sporting Life” and “Cannibalism” were among his earliest Johnson poems to appear in print. Between 2008 and 2011, Matejka published several poems in various print and online publications.

Matejka’s poems on Jack Johnson will appear as a book-length volume a year or so from now. In the meantime, he has granted black studies @ siue permission to display some of his poems from the upcoming book. A year ago, we organized a visual display featuring his poems and photographs of Johnson. For this year’s exhibit, we have taken some of the audio recordings of Matejka’s poems and had our long-time contributor Al Henderson add instrumentals.

Related: A Long Walk with Adrian Matejka & Jack Johnson
Posted by H. Rambsy at 7:44 AM