Earlier today, Jeffrey Skoblow and Eric Ruckh read Allen Ginsberg's poem "Howl" in the Underground Reading Room on the third floor of Lovejoy Library. Skoblow and Ruckh had agreed to do the reading for a small audience of students.

Skoblow and Ruckh have read Ginsberg's poetry before on  a number of occasions outside as part of a yearly celebration to honor the poet's famous poem. I attended their reading back in October. A few weeks ago, Pamela Fetters and I were discussing their yearly readings and mentioned how much we have enjoyed them, so we talked about and then proposed that Skoblow and Ruckh do another reading of "Howl" for Fetters's students at the Underground. 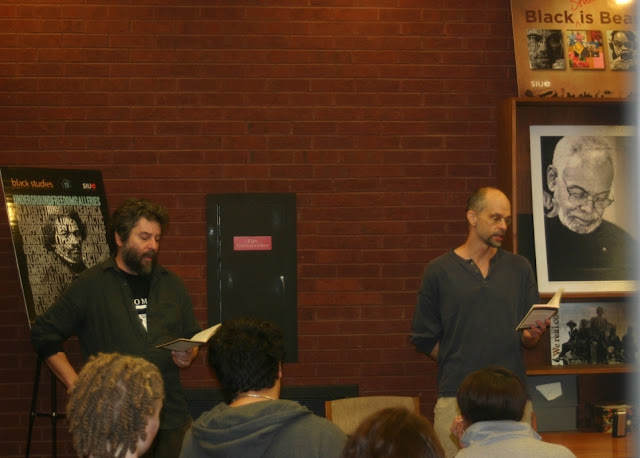 They agreed, and so we made it happen. What I enjoyed most about this presentation of the poem was that Ruckh and Skoblow took questions after the reading and made comments about their approaches to presenting the poem. We learned more about why they are so committed to the poem, how they have changed their approaches to reading it over the years, and the history of Ginsberg's initial presentation of the piece.

There was also something enjoyable about hearing the poem read in a small space such as the Underground Reading Room as opposed to the usual readings outside. (It's worth noting of course that few readings take place outside on campus). Rather than having a preference for the outside or inside reading, I'm glad I have had the option of witnessing both.