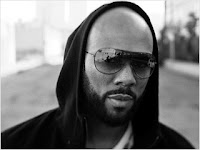 During his presentation at the "Make It Funky" Symposium at the University of Kansas, on November 10, Adam Bradley offered a fascinating narrative about Common's creative process. Bradley served as the writer for Common's autobiography One Day It'll All Make Sense.

During his presentation, Bradley shared a moment he had captured on an audio recorder when he and Common were driving in the car, and Common was trying to come up with rap lyrics. Common played a beat and free-styled over the instrumental.

The clip that Bradley played had Common rhyming with various free associations then muttering in places that he did not have words yet. At times Common talked to himself about what he wanted to say and then he talks to Bradley at times for feedback.

After playing the audio clip, Bradley then switched to a video clip on youtube of Common rhyming in a B.E.T. cypher.  What we witnessed there was a finished product of what Common had been developing and practicing while riding in the car with Bradley.  A collective and audible "ah-ha" moment emerged among the audience when everyone realized that we were observing the results of that initial behind-the-scenes session of a rap coming together.

There was something special about witnessing Common in that somewhat vulnerable and private creative moment when he was thinking through his work. It was also a special moment because of the rare chance we had to see a rap by a well-known figure like that at the development stage.
Posted by H. Rambsy at 9:02 PM