Why Huey vs. Riley Matters 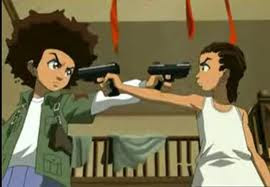 I've covered a fairly broad range of topics on my blog over the past two years related to black studies. But according to the traffic stats on my site, my Huey vs. Riley entry, which I posted this past summer, has gained more attention than any other writings here.

Aaron McGruder is one of a select group of writers I plan to produce more extensive pieces on over the next couple of years. When I wrote the piece on Huey vs. Riley, I did not expect it to become so popular.

Of course, I do view the brothers' conflict as a driving force of energy behind the show. Their conflict and differences are probably suggestive of some larger contrasts and tensions among black folks or any people for that matter. At the same time, the Riley vs. Huey saga is about conflict even with an individual person.


Notably, Huey and Riley, not to mention all the other characters from The Boondocks emerged from the mind and imagination of McGruder, who based those figures off of quite a few folks throughout African American history and contemporary cultural life.

I imagine most folks who view my writing about the brothers are less interested in black studies in general. I mean, I don't think they come to the site to read about black studies then happen to find my entry about Huey and Riley. Instead, they are likely doing general searches about The Boondocks and Huey and Riley in particular and then happen to go find out about the entry.

Imagine that: Huey and Riley leads people to a black studies site.

I've been thankful for and fascinated by all the page views for that single entry receives. As a writer, I've also been slightly embarrassed because that entry was not particularly extraordinary or impressive. At least I didn't think so when I wrote it.

I've written and published a couple of scholarly articles as well about The Boondocks, but I doubt those pieces will ever reach as many people as my blog entry, though I suppose the published articles will "count more" in terms of my professional record. Whatever that means.

Well, perhaps I shouldn't be so dismissive of the professional record and scholarly articles. There might be some useful interactions. For instance, I'm sure I'll think about Huey vs. Riley more the next time I sit down to produce an extended scholarly piece on The Boondocks.

The decision to focus on those two a little more is certainly influenced by my knowledge that general web surfers have showed interest in that topic--the Huey vs. Riley conflict. Maybe we shouldn't let readers dictate everything we write, but I also don't think we should ignore trends and indications of reception either.

It might be worth considering as well if there's something compelling about the idea of "vs." or conflict in general. Could Huey vs. Riley be a stand-in for that long, historic interest in good vs. evil? I guess we can't say Huey is fully good nor is Riley that evil. Still, something about their contrast is appealing.

Not only do opposites attract to each other; opposites also apparently attract an audience.

I'll keep thinking on the saga of Huey vs. Riley and the reasons why their saga gains attention as well. Feel free to share your thoughts on the subject as well.
Posted by H. Rambsy at 9:55 AM