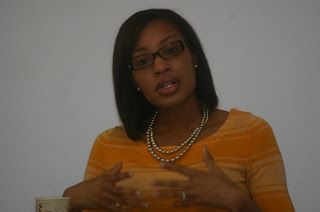 Traice Webb
One of our longtime black studies contributors, Dr. Traice Webb, from Counseling Services, demonstrated once again that she's one of our university's most thoughtful and important voices when it comes to conversations about race and efforts to expand opportunities for all students.

Webb was part of a panel "Racism in American Higher Institutions of Learning" at SIUE's College of Arts and Sciences "Thinking about America" colloquium. She was joined by sociology professor Erin Murphy and student Johnathan Long, both of whom helped expand the conversation as well.


Webb did a good job of providing a broad overview of the national challenges facing African American students pursuing graduate education and then connected those challenges to some of the local issues on our campus. In particular, she mentioned how isolation and alienation remain persistent problems for black students at universities like SIUE where they constitute such a small portion of the overall student population.

Webb's comments suggested the need for us moving beyond the blame-the-student model and thinking about ways that we as a university can do more to address some of the challenges. 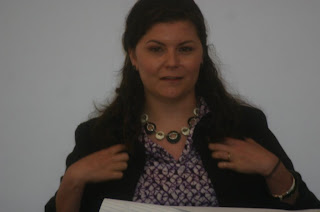 Erin Murphy
Murphy pointed out the need for making a distinction between individual racism and institutional racism. Individual racism might involve isolated acts--intentional or not--where a single person or small group does something to offend or harm members of a particular race or ethnic group.

However, institutional racism, Murphy noted, is not about intentions, but rather outcomes. A university can do quite a bit when it comes to affecting the results of individualized racist incidents or how the college community addresses problems, even before those problems occur. When it comes to confronting issues related to racism, said Murphy, "institutions can have a plan." 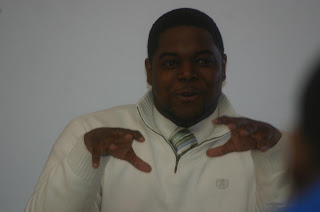 Jonathan Long
J. Long provided perspectives based on his experiences as a student here. He drew connections between our inabilities to talk about race and the well-known speech by U.S. Attorney General, Eric Holder--who noted that we are typically a "race of cowards" when it comes to talking about race and racism. Among other issues,
Long highlighted the discussions (or lack thereof) about an incident with students at SIUE's dental school involving black-face.

The panel discussion was organized by Linda Markowitz, professor of sociology and director of Women's Studies here at SIUE.
Posted by H. Rambsy at 1:00 PM