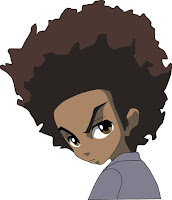 Every semester for the last couple of years that I’ve included Aaron McGruder’s collection of comic strips A Right to Be Hostile: The Boondocks Treasury in my African American literature courses, I’ve come to expect a few students pulling me aside after class to tell me about their connection to Huey Freeman, the protagonist of the strip. They express a connection to Huey.

“I’m right with Huey on so many things.”

They convey those and other related comments.

As we extend the conversations, however, it becomes clear that what they really find valuable about McGruder’s main character is that they share an intellectual kinship with the rebellious and brainy 10-year old. Huey prevents them from certain feelings of loneliness and solitude.

In a way, it’s not unusual for students in literature classes to talk about their affinities to protagonists in the novels and short stories that we read. The medium of the comic strip, though, perhaps leads to important differences, which make it possible for some students to build a connection with Huey that is less likely with the characters we come across in novels and short stories.

For one, the brevity of individual story arcs and the large quantity of strips allows us to follow McGruder’s characters in various scenarios over an extended period of time.

Second, the combination of words and visuals, not to mention the sight of the main character Huey, creates a sturdier connection than we have with figures in novels. Finally, McGruder — through Huey and the strip in general — engages fairly contemporary subjects and pop culture, something most of the major novelists that we cover do not do.

The camaraderie that many of my students feel with a Huey Freeman, or more broadly with an Aaron mcGruder, indicate the importance of having more voices in the public sphere that address and critique the legacies of anti-black racism on the one hand and the troubling aspects of black culture on the other hand.

There might also be some value in introducing students to artistic works such as African American comic strips as viable “texts” for investigation. More importantly, I've learned that Huey serves as a valuable intellectual connector for young folks.