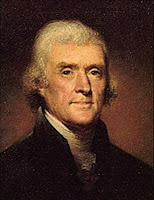 My interest in the ways that poets engage the past makes Evie Shockley's poems about figures like Frederick Douglass and Thomas Jefferson in her book the new black especially appealing to me.

Evie is one among several contemporary poets such as Treasure Williams, Tyehimba Jess, Rita Dove, Honorée Jeffers, Kevin Young, and many many more who channel the spirits of historical figures in their works. Poets often engage aspects of African American history by writing persona poems in the voices of distinct personalities from the past.

Evie's poem "dependencies" extends the practice of a poet engaging history, but her mode of writing is less common. She writes her poem in the second person, and the "you" that she addresses is Thomas Jefferson.

In the opening stanza of "dependencies," she goes:

visiting monticello was
an education     of course    you
named your home in a romance
language    spent 40 years
constructing it     and the myth
of yourself.

Now first off, it's worth recognizing that the respected former president gets checked about constructing the myth of himself. It's a subtle yet defiant or dismantling comment for someone to make.

Actually beyond that initial check, the message, line breaks, and spacing of that stanza and stanzas throughout the poem are crucial. For one, the poem advances the idea that the speaker (Evie), who has visited the popular tourist destination Monticello, is now conversing with Jefferson about his estate and experiences there. 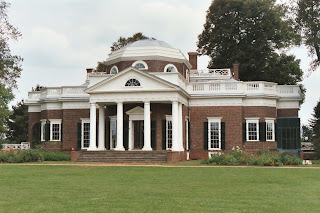 The spacing between certain words in the first stanza and throughout the poem suggest that the reader is pausing and perhaps taking her time to absorb and think about her words as she communicates    slowly       and deliberately      with the esteemed founding father.

Over the course of the poem, Evie converses with Jefferson about the design of his home, his interest in wine, his relationship with Sally Hemmings (his slave whom he had six children with), his experiences as president, and other aspects of his life.

The tone of the poem is pleasant and friendly, like a cordial letter. But there are these strong senses of irony throughout the piece that reveals that Evie is aware and raising awareness about Jefferson's shortcomings and possible hypocrisy. For example, in one stanza, she writes that "like you   i read    the poetry / of that good christian    phillis wheatley / her ode to george washington    the one / who freed his slaves."

Of the twelve American presidents who owned slaves, only Washington set his free in his will. Evie's reference to the fact that Washington freed his slaves reminds us that Jefferson did not free his.

In another stanza, she mentions that Jefferson's legacy was drafting the Declaration of Independence. In the same stanza, she notes that "you left    130 black people          enslaved."

She closes the poem noting that in "some world    an even / newer one" that she and Jefferson may have shared a conversation. But "in this world    i prefer your          words," especially those words associated with the Declaration of Independence, "better          than you."

Throughout my comments here, I have been referring to Evie as the speaker of the poem. That designation of "speaker" seems limiting when we consider that she is also the designer of the poem, and her active role in the setup is crucial for understanding what she's up to in the piece.

The poem includes fragments of the opening of the Declaration of Independence positioned to the right side of the page throughout the piece. The positioning of those words look like an additional poem alongside Evie's words.

At intervals in the poem, she also includes excerpts from a brochure about Monticello. The poem's title is referenced in one of those excerpts: "These 'dependencies,' or areas for domestic work, served as points of intersection between Jefferson's family and enslaved people, and were instrumental to the functioning of the house."

Later in the poem, Evie mentions that since Jefferson had six children with Hemmings he was apparently "making a dependency" of his bedroom--a suggestion that having sex with and bearing the children with her master was part of Hemmings' "domestic work." The power of the word dependency in that stanza rests on Evie's previous inclusion of the excerpt from the brochure featuring the word "dependencies." The ideas which are conveyed are a matter of wording and also of design.

Overall, this poem "dependencies" offers another possibility when considering how poets engage the past and historical figures. The setup of the poem -- its use of the Declaration of Independence and the excerpts from the Monticello brochure -- also remind us to view the poet as writer and designer, which is necessary given the visual experience of reading a volume like the new black.

Related:
The Visual Experience of Evie Shockley's the new black
Posted by H. Rambsy at 4:17 PM