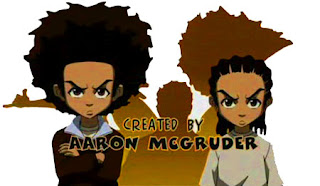 Any of you out there been checking for the current season of The Boondocks? The season is about 7 episodes in, and several folks (and I'm especially thinking of folks in the conscious circles) have been complaining about the absence of the intellectual and militant Huey Freeman in more of the main story-lines. More episodes, it seems, have highlighted the exploits of Huey's younger brother Riley, a figure obsessed with the excesses and problematic qualities of hip hop.

Admittedly, I was one of the folks wanting to see more episodes featuring Huey. He's the protagonist that first drew me to the comic strip and then the cartoon, so I'm always tuning in to see how the show's creator McGruder positions the activist-minded 10-year-old against various adversaries.

After watching the most recent episode where Riley channels the spirits of various gangster movie personas in order to run a fund-raising scheme, I've become open to some alternatives. Riley is not conscious like Huey, but in television representations at least, he does make it possible for McGruder to explore a variety of ideas.

Initially, I thought that McGruder did his best work when he was using Huey as a mouthpiece to critique the injustices of racism and the problems of some aspects of black culture. But, could another useful approach to raising consciousness involve dramatizing the absurd actions of a character like Riley?

Rather than concentrate on the heroism of Huey, McGruder seems interested in utilizing the problematic bravado and willful anti-intellectualism of a Riley to convey ideas about the dangers facing black America today. I'm still working out answers to the question of whether Huey or Riley works best in the service of raising consciousness.

Related: A Notebook on Aaron McGruder
Posted by H. Rambsy at 11:28 PM

I am your newest follower!

Good to have you.

I think McGrudeer is simply showing how some of the black youth think in today's culture. The funny thing is Riley's line of thinking isn't too far fetched from from the mentallity many young boys have growing up. I would say his attitude isn't that different from the black youth in the "the hood" but it extends to the suburbs as well. I think it is most prominent in the suburbs because kids in suburban areas don't have first hand accounts of the dangers of gangster life. All they have to go on is movies and tv shows which can often times be misleading.