[Recent additions to a developing notebook on the Eugene B. Redmond Collection] 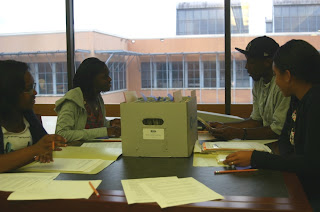 This summer, I’m at the University of Texas at San Antonio (UTSA) providing instruction duties for the African American Literatures and Cultures Institute, a summer program that encourages and assists rising seniors in their preparations to pursue graduate study.

On Friday, reference librarian Tara Schmidt and rare books librarian Juli McLoone organized a hands-on archival activity at UTSA’s library and special collections. Our institute fellows received an opportunity to look through materials from the Sterling Houston Papers. Houston (1945-2006) was an actor, writer, and musician from San Antonio whose thirty-career professional career in theater empowered him to provide a range of social commentary.

I was unaware of his work until the archival activity at UTSA for our institute fellows; I’m thankful that Schmidt and McLoone brought Houston to our attention.

Maya Angelou was one among the many artists that Houston collaborated with over the course of his expansive career. In 1995, he adapted a play based on Angelou’s poem “On the Pulse of Morning for a cast of nine speakers and four singers, which was then presented in concert with Dr. Angelou.”

I only became aware of the collaboration between Houston and Angelou as I was looked over the shoulders of our institute fellows browsing through the materials. A group of the students stopped in surprise and delight when they recognized a few letters from Angelou to Houston.

At one point in the letters, Angelou urges Houston to keep raising “consciousness.” And what really caught my attention appeared toward the end when Angelou wished “strength” to Houston’s art. Angelou’s particular phrasing echoed a familiar closing line that I have received from Eugene B. Redmond, whose massive collection of writings, photographs, and correspondences are currently being organized and cataloged as the Eugene B. Redmond Collection at SIUE's Lovejoy Library.

When Redmond writes recipients who are artists and writers, he often closes his letters by wishing “strength to your writing hand.” Redmond and Angelou have been good friends for more than 30 years now, and I imagine the voicing and encouragement of strength for artistic purposes among their circle of friends over the years. The appearance of a similar line in Angelou’s and Redmond’s correspondence is likely just a glimpse of common habit among these two writers to regularly send lines of artistic encouragement to fellow artists.

So far, they have received varying degrees of attention for the poems they write, for instance. But what about their short correspondence/writings encouraging other writers to continue and expand their artistic endeavors? What artistic encouragement between black writers and black writers tells us about the development of African American literary art might be intriguing to investigate.

Related:
Understanding the EBR Collection
Posted by H. Rambsy at 8:10 AM