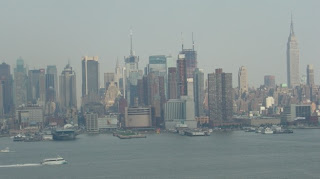 I discovered that it is not the quality of goods and utility which matter, but movement; not where you are or what you have, but where you have come from, where you are going and the rate at which you are getting there. --C.L.R. James

So now that we completed the Showcase, we're gearing up for “Black Studies Writing New York,” a travel project where a group of SIUE students affiliated with the program will produce reporting and documentation focusing on New York City. We'll visit a few museums, libraries, used bookstores, record stores, and historic locations. We're hoping the travel will provide us with unique opportunities for expanding academic and intellectual capabilities and allow us to contribute to the development of the Black Studies Program’s ongoing humanities projects.

In preparation for the trip, I recently asked the travelers what appeals to them about NYC. I've provided excerpts from some of their answers:


I'm drawn to New York City because in a lot of ways, New York is arguably the center of African American music, fashion, and culture. Not only is New York the birthplace of Hip Hop, it played an instrumental role in the growth of Jazz and Blues. -Dometi

...more interesting to me, is the way that the City also functions as "the world"...condensed. A place where one might observe/interact with people from every other country on the planet. Maybe the only place where a project like NYChildren--a project undertaken by photogragher Danny Goldfield to photograph one child, under 12, born in every country on the planet who is now living in New York City--is even possible. -Marci