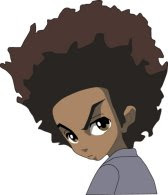 Huey Freeman, the protagonist of McGruder's strip, was regularly a focal point of our discussions. Was it because of his intellectualism, his condition as an outsider, or both? McGruder had referred to his character as a "radical scholar," so I wondered if we needed to qualify the label "intellectual" with words like "radical," "militant," or "isolated." I wasn't sure, and thus got input from the interactive participants. Here's how a few of them responded:


I would have to call him a radical intellectual. He has lived in "da hood" and now he lives in this all-white suburb. I label him as a radical intellectual because he clashes with both worlds. We don't get to see Huey in Chicago/"da hood" but, as we mentioned in an earlier post, Huey does satirize blacks. And in an intellectual way. He wants to abolish parts of both ways of living. That's why he does his blogs and takes his strikes when he does. He thinks outside and around both of these worlds. –Orlondo


Huey and his complexities as an outsider draw audiences to him. ... Huey seems to be the most admirable character as well. He’s the character everyone secretly wants to be. He makes being smart cool. I guess it’s something about Huey being a “cool militant” that various audiences can relate to. He’s the voice of reason many times in chaotic environments. He keeps a cool head and overall he teaches a lesson. These character traits help to make Huey appealing. --Kenton


I would consider huey to be a militant intellectual as well. Considering his environment, this made him an outsider. It's interesting to see how he deals with moving from Chicago to this very different environment. This made me think about the idea that Kenton brought up. He said that intellectuals and radicals should be separate from the world in order to analyze it and this definitely seems to be true. I think his intelligence makes him an outsider while his militant attitude makes him cool. I don't think he would be quite so captivating without this combo of traits. –Dometi