The poet-researcher in the age of Black Lives Matter 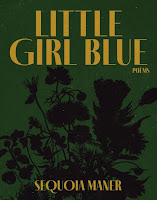 Check out the notes section of Sequoia Maner's Little Girl Blue (2021), and you'll see her statement,  "Several poems are informed by and developed from autopsy, police, and other state documents, along with personal testimonies and manifestoes." Hey, that note is an indication that we're witnessing a poet-researcher producing work in the age of Black Lives Matter.

For the last two decades, I've been taking note of poets working through the archives, often focusing on documents related to slavery. Elizabeth Alexander on the Venus Hottentot, and later Alexander and then Kevin Young on the Amistad. But there's also Tyehimba Jess and Adrian Matejka on Leadbelly and Jack Johnson, respectively. There's Robin Coste Lewis working through art history.

It was Marilyn Nelson's book Carver (2001) that first got me on to this idea of poet-researchers. That's not to say black poets weren't digging into the archives and history books even earlier. They were. Most notably in some ways  for me was Robert Hayden. Think of his "Middle Passage" and "Runagate Runagate" as precursors to what we're seeing.

Realizing that those were the documents she drew on had me re-reading several pieces in new ways. Her poems on Trayvon Martin, Sandra Bland, and Natasha McKenna aren't just a poet turning inward and presenting words based solely on her imagination. No, here, we're seeing the results of a researcher and a poet, of a writer reading, analyzing, remixing, re-presenting.

What happens when a poet-researcher reads the medical examiner's report about a black woman who was found dead from a hanging in her jail cell? Maner tells us in "Upon Reading the Autopsy of Sandra Bland." What do things look like as facts and imaginings are gathered in the case of a black woman who was repeatedly tasered by police and eventually died from the injuries? Maner's poem on McKenna provides some answers.

Little Girl Blue is this lil chapbook, but it's pointing to big things in terms of how we envision poet-researchers in the age of Black Lives Matter.