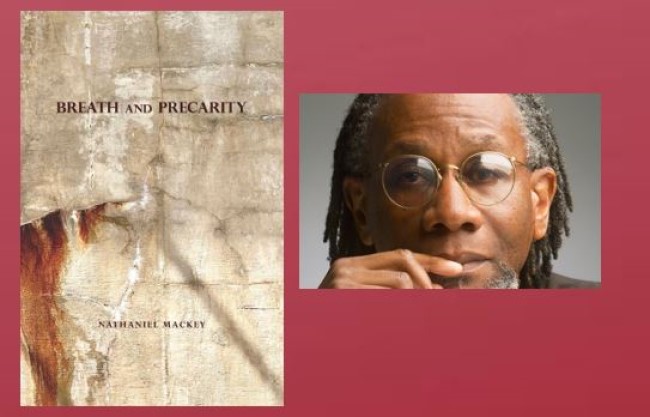 I recently read Nathaniel Mackey's Breath and Precarity (2021), which was his keynote lecture for a conference at Columbia University's "Vision Festival" in July 6, 2015. The New York Times covered the event. Mackey's keynote, which he delivered in a few other forms over the years, is now availabe as a short book from the press Three Count Pour. The book also includes his poem "The Overghost Ourkestra's Next" about an invented band.

Mackey had prepared the lecture for the Vision Festival but also for the first Robert Creeley Lecture in Poetry and Poetics at SUNY Buffalo, which he delivered on April 8, 2016.

There's a video from November 9, 2016, where Mackey delivered his "Breath and Precairty" lecture for the Leslie Scalapino Lecture in Innovative Poetics at the English Department at UC Berkeley. You can hear Mackey delivering the lecture in November 2016 at Reed College, which Barry Johnson wrote about in a piece, "Nathaniel Mackey: Black breath matters."

Mackey's lecture or a version of it also appears as "Breath and Precarity: The Inaugural Robert Creeley Lecture in Poetry and Poetics" in Poetics and Precarity (2018) edited Myung Mi Kim and Cristanne Miller. I enjoyed reading the piece in the book, Breath and Precarity, and then tracing the different places where Mackey presented the piece.

In his lecture, Mackey charts some of the conversations about breah and breathing that emerged in discussions of poetry and poetics during the 1950s and 1960s. Charles Olson, Allen Ginsberg, Amiri Baraka, and others, notes Mackey, had engaged in conversations about the meaning of breath and what it might mean for the production of poetry.

Mackey expands and notes how and why breathing is a crucial idea in jazz, especially among wind instrumentalists like saxophonists. He provides reflections on and descriptions of various jazz pieces like Sonny Rollins's "On Green Dolphin Street," Ben Webster's "Tenderly," Roscoe Mitchell's "The Flow Things, No. 1," and Archie Shepp's "The Magic of Ju-Ju." I was reading his comments, pausing and going to listen to the songs he mentioned. It was a great time.

Eventually, Mackey mentions the killing of Eric Garner and his last words, "I can't breathe." So we see a progression from poetry to jazz to some larger ongoing concerns about what breathing and struggles to breathe mean for African Americans and how it's not just black lives, but also black breath that matters. It's all precarious.