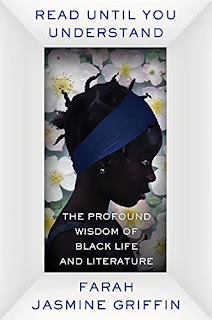 Over the years, thanks in large part to the many black students I've worked with and the conversations we've had, I've gotten to hear quite a bit about the roles of black men passing along books and educational lessons to younger folks. In the courses I teach comprised of first-year collegiate black men, the discussions of what they've learned from their fathers and uncles are especially prevalent. The young guys will talk about how older black men introduced them to various books or shared unwritten histories with them.

These stories of how information and ideas were passed along by black men give me unique views of the production of knowledge in our communities. Farah Jasmine Griffin extends my interest in the subject with her book Read Until You Understand: The Profound Wisdom of Black Life and Literature. Griffin's father died when she was nine years old, but he had already instilled a sense of wonder concerning books, reading, and writing with his daughter.

Most notably, not long before he died, Emerson Maxwell Griffin thought he was going to be sent to prison, so he gave his child books and scribbed notes in the front and margins. In one book, he informed her: "Jazzie, read this book / You may not understand it / At first. But read it and understand" (36). In another book, he wrote a note: "Baby read it until you understand" (36).

A short time later, he died, and, as Griffin points out, "the notes in the books became even more precious. His hand had touched them, his distinct, careful handwriting contained something of him. He had cared enough to write notes to me" (37).

Griffin recalls lessons here and there that she picked up from her dad at a young age. Losing him so soon but having the books in the house that he owned meant that she was determined to read those works. (She also learned quite a bit from her mother and others, which I'll take up in a future post).

The young Griffin learned that her father held Frederick Douglass and Malcolm X in high esteeem, so she did as well. His interest in those figures led her to read about them and learn more about their related and different worldviews.

Griffin's father taught her "by word and example" that "reading and study were central to our strugle as a people and to my overall development as a human being" (36). Reading the books her father read led her to more and more books and authors, and following those various lines of study led her to seek out and work with various accomplished teachers and mentors.

In high school, she worked in the office of Federal District Court Judge A. Leon Higginbotham, where she catalogued many of the books in his chambers. In undergrad, she worked closely with  the literary scholar Wernor Sollors and the historian Nathan Huggins. In graduate school, she studied with the philosopher Cornel West.

Maybe some of you have asked as I have: what led to the emergence of a brilliant African American literary and Black Studies scholar like Farah Jasmine Griffin? This book provides an answer: a loving, politically-minded and intellectually curious black father.

Read Until You Understand: The Profound Wisdom of Black Life and Literature is an important touchstone for those of us interested in the transmission of knowledge among African Americans. Similar to those stories about fathers and uncles shared by my students, Griffin's book is, among other things, a tribute to and elaboration on a well-read black man.

Related
• A Notebook on Farah Jasmine Griffin's Read Until You Understand
Posted by H. Rambsy at 6:29 PM