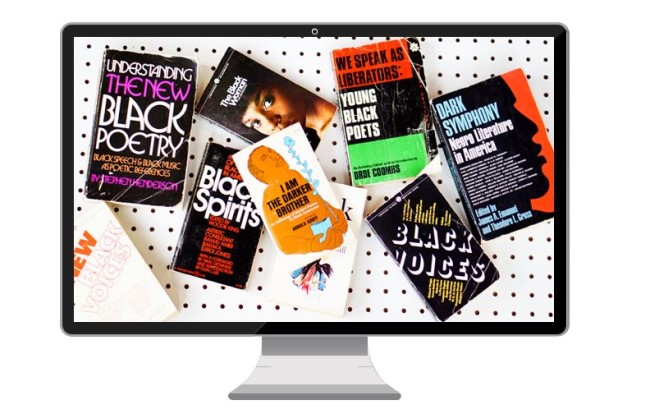 Here's a brief narrative about the value of working with a DH Center on an African American poetry project. I'm documenting this positive experience as an alternative to a previous article I wrote about how scholars of African American literature are often on the margins of DH.

In February, I met with the co-directors of our university DH Center Kristine Hildebrandt and Jessica DeSpain as well as the center's new research professor, Margaret (Meg) Smith. The meeting was a chance for me to give them a heads up on the projects that I would need their assistance on for the coming semester.

Prior to the meeting, I sent them a short document listing five upcoming projects with two to three bullet points describing each project. During the one-hour meeting, we moved through the five projects with me talking about what I vaguely had in mind, and they posed follow-up questions.

It was a good and rare experience to have a meeting where my projects, mostly in early stages, were the center of an extended conversation. Often in our field, you work on projects in isolation and perhaps produce a fifteen-minute conference presentation on a panel with two to three other presenters.

What if the approach to project development was different, however? What if you met with scholars and technicians at the outset, when your idea was not fully formed, and what if you had the chance to talk through what you might have in mind? What was happening at that meeting with our DH Center is perhaps a process that should occur with more scholars and graduate students in African American literary studies even beyond the realm of DH.

One of the subjects on my list, in fact the priority on my list,  was a digital project on African American poetry. Since February, this poetry project is what Meg and I have worked on the most, among those items on my list. We're building toward a mini-prototype and a proposal for a funding agency based on the project. I've been building some extensive bibliographies and producing writings about the research and where it's headed.

Meg -- bless her -- has been working to transform some my notes and ideas into a functional digital resource. We have meetings for updates and to sharpen our focus. Receiving her updates and seeing what she has been doing on her end made it possible for me to clarify my ideas for the first major draft of the proposal, which I recently completed.

I was fortunate to get early input from Meg, Jessica, and Kristine. Of course, it took me a while to get to this point. By the time I sent them my list of projects in February, I had been talking for years, for instance, with Jessica about American and African American literary studies. Too, Jessica and Kristine co-founded the DH Center in 2009, so they were well-versed in talking with professors like me about projects in the early stages.

Still documenting processes like these are worthwhile for pinpointing what works.
Related:
• Building an African American poetry project with a DH Center, Part 2
Posted by H. Rambsy at 6:22 PM