Reading Batman and the Outsiders with students 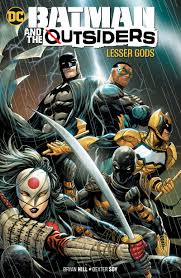 Over the last few months, I re-read Batman and the Outsiders: Lesser Gods written by Bryan Hill, and drawn by Dexter Soy with coloring by Veronica Gandini. I had previously read and enjoyed the individual issues of the comic book, and so I wanted to cover the book as part of one of the online reading groups I coordinate each semester.

In the past, I have covered standard books -- Malcolm Gladwell's The Outsiders, Sarah Lewis's The Rise: Creativity, the Gift of Failure, and the Search for Mastery, Kathryn Schulz's Being Wrong: Adventures in the Margin of Error, Isabel Wilkerson's The Warmth of Other Suns: The Epic Story of America's Great Migration, and several more. This was the first time that I covered comic books. As one group of guys read Batman and the Outsiders, another group read Black Panther written by Ta-Nehisi Coates and drawn by Brian Stelfreeze.

I covered the Hill's book with about twenty African American students. They would read an issue or chapter in the book, and every other week or so I would pose a general question. The students would produce short responses.

It's difficult to summarize the responses the guys offered, since there was so much variation. Still, I wanted to take some time to re-present a sample of their responses over the last few months. 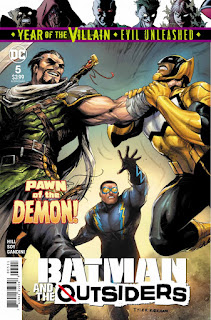 We were all really fascinated by the dramatic fight scene from chapter 2. In addition to the action, we were impressed by Hill's choreography and Soy's drawing.  "I found the fight sequence to open the chapter was quite stunning," wrote Jalen. "The way the art almost jumps off of the page was impressive, and to me it felt almost cinematic." Tyler commented that "I found the fight with Ishmael to be an excellent example of writer and artist telling a story together."

With chapter 3, I encouraged the students to pay attention to the dual stories that Hill was telling -- one with Batman and one with Ra's Al Ghul. Noah commented that "I think at first it felt confusing, but I quickly realized why the author chose to do it this way. He was trying to compare the two approaches, almost frame by frame to each other." Noticing that some responders said they were initially confused by the setup, Jalen wrote that "In my opinion, I really enjoyed the switches, but I can see why some people would find it confusing. I thought it was a very clever way to demonstrate a comparison, and it came off as very original. It was also a good way to draw in suspense, or keep the reader interested."

Batman and the Outsiders had a few different storylines and key characters. Students diverged on who they were most interested in. "I am most interested in seeing the growth Black Lightening goes through during the rest of the comic," noted Donovan as we move through chapter 4. According to Justin, "The best part of Chapter 4 was seeing Sofia fall between opposing sides and not knowing where she will land."

For chapter 5, I asked the students to identify key scenes, and Tyler wrote the following:

While technically not a panel as much as an out-of-story illustration, the drawing where 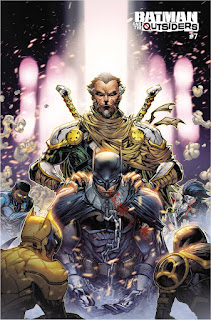 Batman is standing next to the broken and beaten gear of the Outsiders was compelling to me. It shows Batman covered in regret and guilt for what has happened to the Outsiders in a different scenario. It shows that he takes responsibility for whatever happens to them. I believe that a scenario like this will eventually happen. One where Batman will have to face the consequences of what he has sent the Outsiders to do.

Lead characters Batman and Black Lightning are not present in chapter 6, and I asked the readers what difference the absence of marquee heroes made for them. "It annoyed me at first,," observed Ishmael, "but I started to appreciate that they were not there so it made the readers be fearful for Duke and Cassandra." J'kolbe noted that "I personally really enjoy having the marquee hero's absent. I feel like the story tends to be more unpredictable and dangerous when the unbeatable hero isn't around."

The guys mostly took note at the conclusion of what they referred to as the "open-ended conclusion." The series Batman and the Outsiders ends with issue #17, but here with the trade paperback they read, the story closes with issue #7. So the guys wanted to know what was next. Describing the closing, Torian noted that the "sequence of events really surprised me, but also intrigued me. It took a second for me understand the bigger picture behind the events but once it settled in I began to get excited."

Related:
• A notebook on comic books
Posted by H. Rambsy at 4:39 PM