On the one hand, 2020 has been a terrible year. But I have to admit, at least in the realm of listening to several scholars and writers I admire present ideas, the year has been unusually positive. During the fall semester, I caught several presentations and talks that I would have otherwise missed.

Simply put, I would not have had the financial resources and time to attend so many different lectures under normal circumstances. I tried to document some of what I viewed. Here's a roundup.

In late July and early August, I caught a series of conversations between MTV journalist Dometi Pongo and Secretary of the Smithsonian Lonnie G. Bunch III. For their focal points, they considered movements, marches, music, media, and memory, and I really enjoyed the intergenerational nature of their exchanges.

There were so many highlights from their discussions of Morrison. Among other things, it was really great hearing McDowell laughing and telling funny stories about her times with Morrison. A couple of my graduate students were surprised and moved to hear and see her, because they previously only had access to McDowell's serious scholarly voice, which I learned over time following her on Twitter, is just one small part of her multiple modalities as a communicator. "You gotta follow her on social media," I advised my students.

I'm an executive officer with the Toni Morrison Society, so I got to serve as a co-organizer for the event. But more important, I got to witness (and steal ideas from) Dana Williams on how to pull off big projects. I've been stealing borrowing ideas from Maryemma Graham and Carolyn Denard as well. 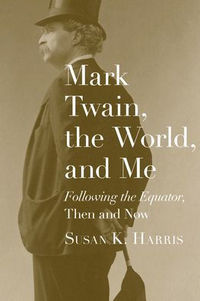 On August 13, I attended a presentation where Susan Harris discussed her  book Mark Twain, the World, and Me: Following the Equator, Then and Now (2020). I was pleased to hear her discussing her inspiring book, which introduced me to some new, useful scholarly threads. I wish more senior scholars were in the position to pursue an expansive research-travel project like the one Harris produced.

In September, I caught a presentation by superhero who disguises herself as the mild-mannered scholar, Alondra Nelson. She was outstanding as usual, and in this instance, I was reminded of her marvelous cross-disciplinary reading powers.

And one point during her presentation, Nelson highlighted the work of scholar Ruha Benjamin, who is well known for studying and writing about the social dimensions of science, technology, and medicine. Sure enough, the next week, I caught Benjamin giving a presentation an displaying her skills as an adept cultural and scholarly mix master.

On November 10, historian Stefan Bradley gave a talk at my university as part of a first-generation college celebration event. Bradley was informative, amusing, and most of all inspiring. More than one of my first-year college students informed me that they had not expected to laugh so much during a presentation by an accomplished scholar.

On November 11, I attended the writing program at Columbia University's Nonfiction Dialogue series, which featured Amitava Kumar. He's an astonishingly prolific writer, and hearing him discuss his beginning and journeys as a writer were fascinating for me to consider. 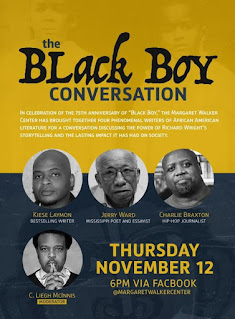 Finally, two days ago, I caught "Roundtable on New Directions in African American Studies and Book History: Part 1," involving the scholars Rhae Lynn Barnes, Brenna Greer, Derrick Spires, and Kinohi Nishikawa. I've been following Spires's and Nishikawa's works for a few years now, and getting to check them out recently affirmed my belief that I'll be learning from them for many years to come.

The aforementioned talks are just the ones that I can easily recall. I'm probably leaving something out. I sometimes wish that blogging culture among African American literary scholars and others was a little more robust as we might get a chance to document and comment even more on what we learned from various presentations.

Related:
• A Notebook on Black Intellectual Histories
Posted by H. Rambsy at 9:03 AM