Revisiting the Elegy in the Black Lives Matter Era 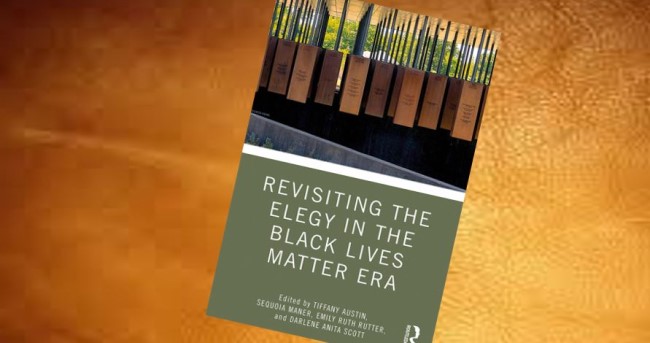 Lately, I've been thinking about this book Revisiting the Elegy in the Black Lives Matter Era (2020) edited by Tiffany Austin, Sequoia Maner, Emily Ruther Rutter, and darlene anita scott. The subject matter of the book is one that seems, well, timeless. We're always dealing with these elegies.

The collection highlights poems that address death, or more specifically the practice of poets writing about the pain of loss and the celebration of those who passed. You can imagine that we've had an outpouring of such compositions in recent years with the attention placed on figures who have been victims of police violence. Trayvon Martin. Eric Garner. Mike Brown. Breonna Taylor. And on and on and on.

The very formation of the slogan "Black Lives Matter" is a lamentation, which emerged in the acquittal of the person who killed Trayvon Martin. It's a statement, yes, but Black Lives Matter has a kind poetic nature to it.

Revisiting the Elegy in the Black Lives Matter Era includes poems and critical prose pieces discussing some of the topics associated with death and pained remembrances. "In what ways," ask Rutter, Maner, Austin, and scott, in the introduction, "does the elegiac mode facilitate healing, helping us to cope with, mediate on, and work to build healthy, sustainable futures informed by this systemic pattern of loss?" That's one of several questions driving the work in this collection.

There is a long history of African American elegies, as the editors note in their introduction. Phillis Wheatley, Paul Laurence Dunbar, Helene Johnson, Wanda Coleman, Elizabeth Alexander, and many many more have produced elegies. I became fascinated by elegies, especially those focused on Malcolm X and jazz musicians like John Coltrane when I was studying the Black Arts era.

Dozens of poets wrote about Malcolm and Coltrane. In fact, there's no small coincidence that the Black Arts Movement took shape in March 1965, a month after Malcolm was assassinated. The formation of the movement was itself an elegiac response to his death. The poems in the anthology For Malcolm and the works channeling the slain leader throughout the 1960s and 1970s solidified his presence in Black literary art.

This collection Revisiting the Elegy in the Black Lives Matter Era gives us reason to consider poems about those we've lost in the current moment.

The book includes three main sections: "Elegiac Reconfigurations," "Hauntings and Reckonings," and "Elegists as Activists." Each section includes poems followed scholarly articles and then more poems. It's a combination that we do not get to witness nearly enough in collections.

I was especially pleased to see opening poems by Tony Medina. He has been writing resistance poems and works about victims of police violence more than most. In this collection, he publishes poems about Trayvon Martin and Freddie Gray.

The aforementioned contributors give you a sense of how much is going on (in a good way) in the book. Despite the variety, this theme of elegy is consistent. Vrana and Maner contribute pieces on the poetry of Patricia Smith. Gallagher and Rashid devote aspects to poetry by Claudia Rankine. Mix writes about Bettina Judd's poetry, and Butler and Feifer write about Edwidge Danticat. They all address elegy to some degree.

References to Trayvon Martin and Emmett Till appear throughout the collection, an indication of how prominent those two black boys are in the artistic and scholarly discourse on Black elegies. Moving forward, we can expect to see the names George Floyd and Breonna Taylor appear more frequently as well. And who knows how we'll ever come to terms with all the people we've lost to the coronavirus?

All of this is to say that I've benefitted by reading through this collection. The poems expand my sense of what poets are doing with elegies, and I hope to learn more as I take more time with the articles.