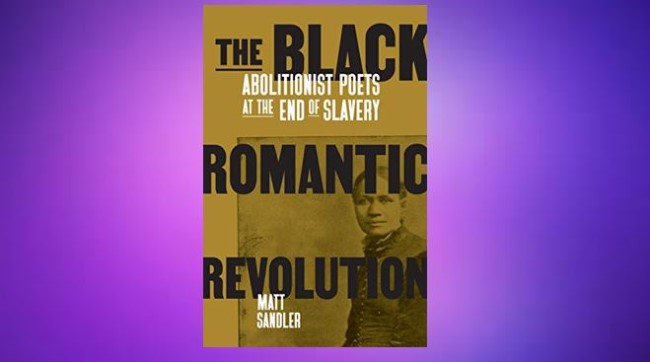 Matt Sandler’s The Black Romantic Revolution: Abolitionist Poetry at the End of Slavery (Verso, 2020) constitutes an important scholarly contribution to American and African American literary studies, and the book is an especially vital expansion of the critical discourse on Black poetry.

Over the last thirty years, scholars expanded and enriched the critical discourse on nineteenth-century African American literature. Much of the work, however, has concentrated on slave narratives, fiction, and print culture studies, including newspapers and other documents. Comparatively speaking, we have relatively few scholarly treatments on Black poetry during this time period, not to mention throughout other moments all the way through the contemporary era. As a study of African American, Sandler’s The Black Romantic Revolution is both a welcome and essential contribution.

But beyond filling a void, what’s immediately notable about the work is that it’s a good, novel idea. While reading Sandler’s convincing discussion of the writers, the concept of Black Romantic poets seems so obvious, but then, it’s not one that’s been widely discussed.

“This book suggests,” writes Sandler, “that, in the middle decades of the nineteenth century, an independent and distinct form of Romanticism took shape among the Black writers of the U.S. abolition movement and radical Reconstruction.” Accordingly, Frances Ellen Watkins Harper, George Moses Horton, Albery Allson Whitman, and several other Black poets “borrowed and transformed the techniques and theories of Romanticism in an effort to bring about the end of slavery and the self-conscious regeneration of Black community. They understood the Civil War era as a belated iteration of Romantic revolution, and imagined their liberation as a part of an ongoing, total cultural and political transformation.”

Sandler supports these claims by detailing the work of an array of writers, offering interpretations of their works and providing useful historical context. He explains that a variety of Black writers cited and repurposed works by Lord Byron, a leading figure in the Romantic movement, especially his well-known Childe Harold’s Pilgrimage. Henry Highland Garnett,

Martin Delany, Frederick Douglass, and W. E. B. Du Bois were among the many figures, notes Sandler, who drew on Bryon’s words such as his famous statement: “Hereditary bondsmen! know ye not / Who would be free, themselves must strike the blow?”

Sandler traces the roots and routes of “Black Byronism,” as he puts it, and more expansively, he charts the developments of Black Romanticism. In the process, he uncovers a fascinating series of poetry projects that highlight struggles for liberation that employ the crucial tools of artistry and probing intellect.

There’s no doubt that The Black Romantic Revolution will serve as a valuable guide and resource for scholars who study nineteenth-century African American literature. Moreover, literary scholars interested in Transatlantic studies have much to gain by following Sandler connect the dots from Eurocentric Romanticism to Black American Romanticism.

These days, it’s quite common for people to discuss the afterlives of slavery. It’s a really important discussion, but at times, I get the sense that considerations of the topic inevitably downplay if not erase significant instances of Black agency and activism. On the contrary, Sandler gave me a clearer sense of how Black people and notably Black writers were actively engaged in resistance to bondage through their artistic and critical works, and through organizing.

As a person who studies modern and contemporary African American poetry, I found The Black Romantic Revolution quite helpful for extending my comprehension of verse histories. Sandler revealed to me many concepts that I have discussed primarily in late twentieth-century contexts. But more important, there’s often so much to learn from a scholar working through poems, putting the words and ideas in historical context and in conversation with various other works and concepts.

One of the gifts that Sandler provides in this book concerns his ability and tendency to show how poems from one era connect to compositions across various other eras. He’s moving from Harper and Horton to Du Bois to Black Arts all the way up to Meek Mill in the conclusion. You love to see someone making Black poetry matter like this.

Related:
• The Engaged Reader and the Bibliographic Essay
• Dreams, Nightmares, and Black Romanticism
Posted by H. Rambsy at 2:10 PM