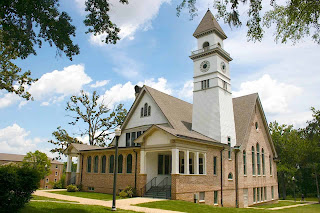 If you research the histories of the English department at Tougaloo College, two of the names that will come up again and again are Naomi J. Townsend and Jerry W. Ward, Jr. Townsend ran the department of English from the 1950s - 1973 before becoming a dean at the college. Ward taught English at Tougaloo from 1970 - 2002.

Alright, but if you start studying the department of English in the 21st century, then one of the key figures to emerge is Candice Love Jackson. Look, I always knew Jackson was cool and funny, smart and helpful for students. But only when I took a deeper look did I get a clearer sense of how central she was to advancing the academic and professional interests of several students who went on to earn PhDs.

Jackson chaired the department from 2004 - 2010. During that time, in addition to a hefty 4/4 teaching load, she created a film series, organized trips, and served as an active mentor for several students. In an interview, she informed me that she wanted to make "English the IT major" at the college. Seven of the eighteen former English majors who've gone on to earn PhDs were students at Tougaloo while Jackson was teaching and chairing the department.

When Khirsten Scott began at Tougaloo, she had ambitions to become a physician. But Jackson had other plans, explained Scott: “She told me very plainly in my first year of undergrad that I wanted to be the wrong type of doctor.” Folks have all these stories like those -- Jackson offering advice and guidance in memorable and humorous ways.

Professor Shahara'Tova Dente, a former English major, told me that Jackson devoted herself to gaining opportunities for students at various institutions, and she frequently distributed information about graduate schools and various opportunities. "And she continued to do so," noted Dente, "after many of us graduated." In other words, Jackson was participating in that Tougaloo post-graduation nudge, whereby professors assist students well beyond their time at the college.