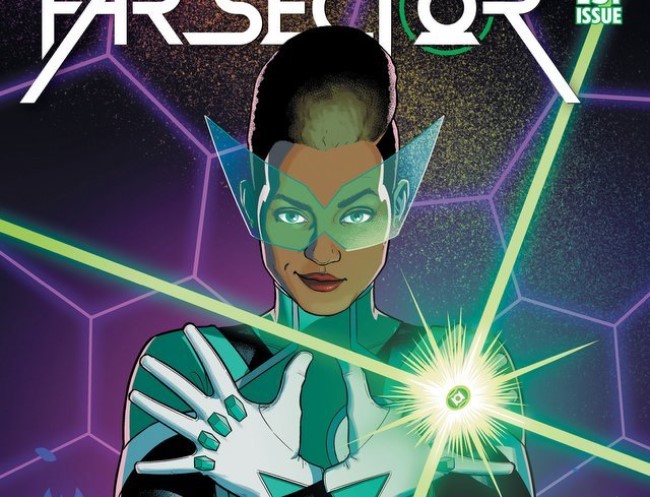 There's worldbuilding and then there's extensive, incredible worldbuilding. N. K. Jemisin and Jamal Campbell are (spoiler alert) involved in the latter. They're out here in Far Sector giving you new races and an otherworldly city.

For three years in a row, Jemisin won best novel Hugo Awards, one of the most prestigious literary prizes for science fiction and fantasy. She brings her outlook as an accomplished writer in one far out realm to the far out world of comics. Sojourner “Jo” Mullein, the protagonist of Far Sector , is a Green Lantern, and she's covering a case in a city on the furthest reaches of the universe. 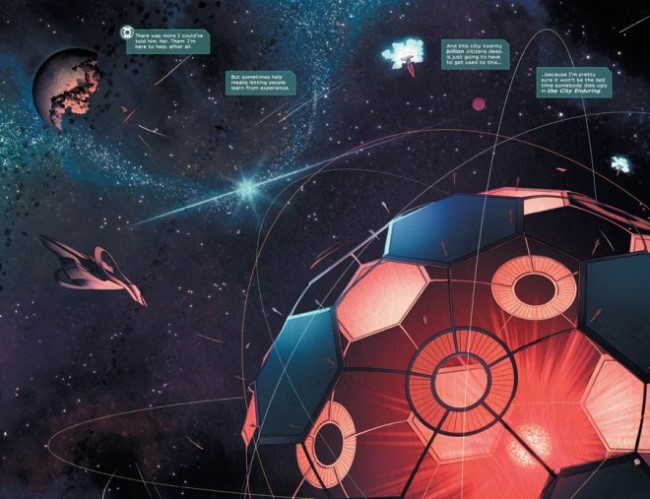 In the opening issue, Jemisin introduces these three races: the @At, the Nah, and the keh-Topli. The story takes place on this expansive space of twenty billion citizens known as the City Enduring. At one point, Jo notes that the sky of the city is not real. "Each day," she explains, "the city builds a new composite sky image from its citizens' imaginations."

In an interview with Charles Pulliam-Moore, Campbell pointed out that he produced the visuals based on Jemisin's extensive "worldbuilding notes." Campbell observed that "When I came on, she had these huge documents about the different races that inhabit the City Enduring, their environments, their histories—everything. My job was to figure out how to convey all of that information visually and physically without, you know, a huge paragraph of descriptive text to get the important ideas across."

Jemisin's commitments to incredible worldbuilding are evident in the first issue. And her talents do not go unnoticed. Reviewers complimented the debut issue on what she does. "The City Enduring feels like one of the biggest creative flexes in terms of world-building," writes Kenneth Laster for Multiversity Comics. Ritesh Babu writes that "Jemisin and Campbell make for a hell of a team here and on the whole, the work is basically a gigantic flex in world-building talent."

I'm looking forward to where things go with the work. It's clear that Jemisin will likely take us in new directions.

this is a great review. I really like Jemisin's novels. This will be a holiday present to myself.