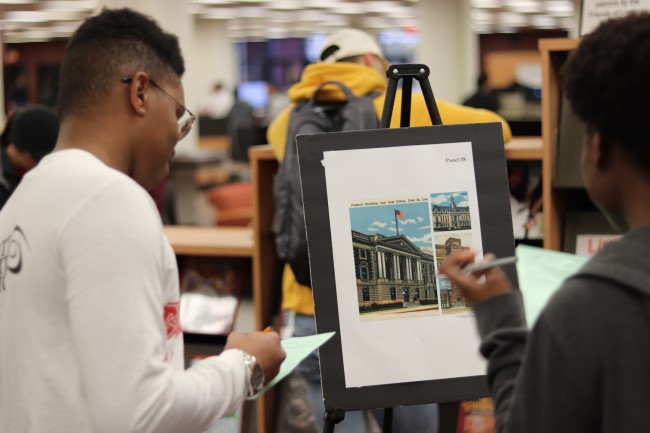 On November 7, for our Public Thinking Event, we coordinated a mixed media exhibit based on East St. Louis postcards from the Andrew J. Theising Collection. On the one hand, we showed collages that were created by members from the East St. Louis Digital Humanities Club. The club members are high school students from the SIUE/East St. Louis Charter School.

We've been working on the East St. Louis postcard collages for a few weeks now, as part of the activities that we do when we meet each week. The high school students got a chance to consider historical views of their city. They also had the chance to produce artistic interpretations as they pulled from and worked with the postcard collection.

In addition to the collages, I worked with a few undergrads and a graduate student to produce short videos focusing on aspects of the postcards. We played and looped the videos during the activity. I've coordinated dozens of exhibits over the years, but this was one of the few in the library that included music. 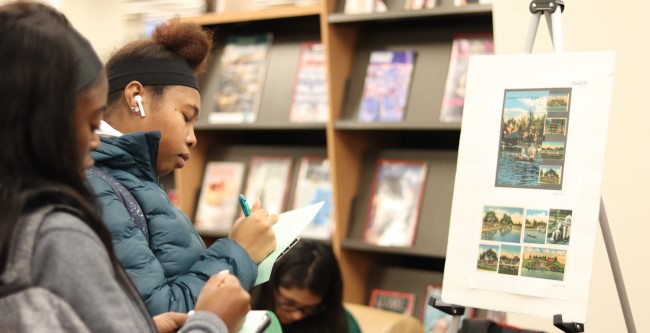 Overall, the collage and video productions based on postcards presented creators with the tasks of re-imagining East St. Louis. They moved beyond passive viewers of the postcards and got the chance to make these cool compositions. 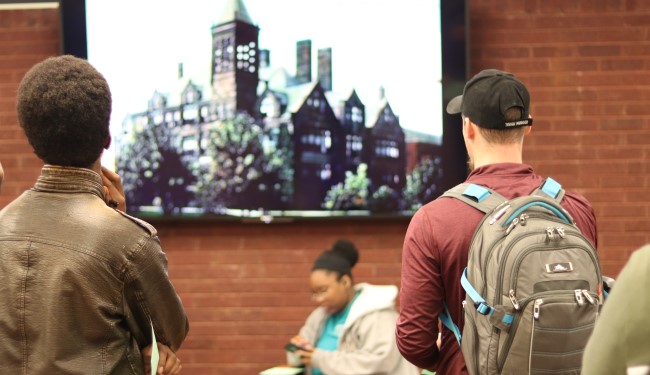 As always whenever I have presented the postcards in the past, several students felt obligated to mention that East St. Louis no longer looks like the postcards. It's true. But so many places look different than they looked nearly 100 years ago.

What those observers are taking note of is just how much the city has struggled. One student noted that "I have only heard negative things about East St. Louis, so it was enlightening to see [with these postcards] it isn't all bad."

In retrospect, I should have done prompts that encouraged visitors to comment more on the artistry enacted by the student creators. Perhaps it's a sign of how seamlessly the art was produced that people only commented on the content of the images. Perhaps.

But it's also true that we just haven't organized enough art shows for students on campus. And we haven't prompted them as frequently as we could to discuss the decisions and results of creators. 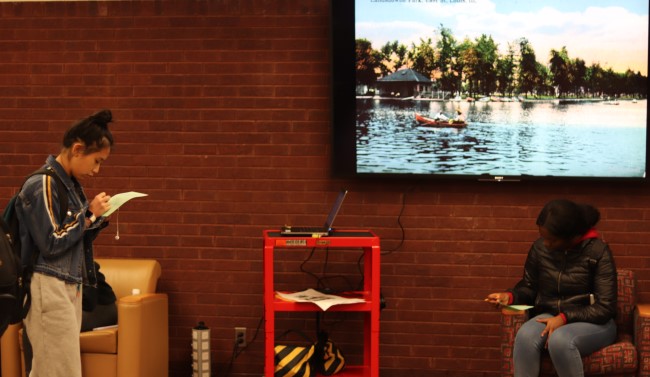 I took special note of responses from college students who are from East St. Louis. They were particularly excited about what they viewed. A couple of them were also pleased to learn that the collages were done by Charter students, whom they knew.

Despite any limitations, I was proud of the overall project. I thought it turned out really well. I'm still impressed by the works the contributors produced.

Related:
• Public Thinking Events
• A Notebook on the Andrew J. Theising Research Collection
Posted by H. Rambsy at 7:41 AM