October 17 - 19, in Washington D. C., the UNCF/Mellon Programs celebrated 30 years of active programming with a gathering of professors, scholars, and former participants. The conference included panels on mentoring, the value of a UNCF perspective, contributions to public discourse, and writing and productivity workshops. There was a keynote conversation between Spence, Beverly Guy Sheftall, and Johnnetta B. Cole at the Smithsonian National Museum of African American History and Culture (NMAAHC).

[Related: Scenes from the UNCF/Mellon Conference]

The UNCF/Mellon Programs are directed by the unstoppable force known as Cynthia Spence. She's aided by the program's longtime and incredibly resourceful Ada Jackson. We've all lost count of how many wonderful gatherings the duo of Spence and Jackson have pulled off over the years, no, over the decades. This recent gathering was no different.

The conference was informative and fun. It was serious, powerful, and inspiring. I certainly left with a sense that I could and should be doing more. And remarks by various participants gave me insight on how to best move forward.

In her role, Spence directs a suite of Mellon programs, including the Undergraduate Fellowship Program, the Junior Faculty Development Fund, the Faculty Seminar, Teaching and Learning Institutes, and the Faculty Residency Program. Spence as been visionary bringing those programs to fruition.


Spence and Jackson organize a conference for new and returning mentors for the undergraduate program. The meeting is designed to prepare those mentors to most effectively guide and assist undergraduates on their research projects.

I first became involved in the UNCF/Mellon Undergraduate program in 1997, while I was still a student at Tougaloo College in Mississippi. In the summer of 1997, I participated in the summer institute for undergraduates from a variety of schools. After that, I was primed to pursue independent research for which the Mellon program provided funding.


During my time in graduate school, the Mellon Mays Fellowship program continued providing assistance. Most importantly, participation in the programs linked me to broad and diverse networks of scholars and organizers, whose ideas and advice have shaped my career.

In addition to covering business as usual, the conference in Washington D. C. was an opportunity to pause and acknowledge the progress and accomplishments over the last three decades. More than 600 UNCF/Mellons undergraduates have participated in the program. Approximately 123 of us have earned PhDs and working as college professors and administrators. We've collectively published articles and books, and we worked with countless numbers of students. So we had much to celebrate.

One of the highlights of the conference was the conversation between Cole, Guy Sheftall, and Spence. Cole is a living legend, having served as president of Spelman College (1987 - 1997) and Bennett College for Women (2002 - 2007). She has curated many major exhibits over the years, and current directors the Smithsonian's National Museum of African Art. 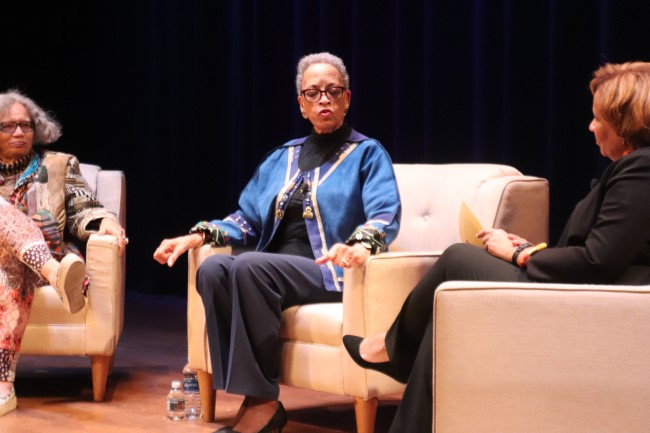 Cole captivated us with her reflections on her expansive career. She talked about teachers and scholars who inspired her. She discussed her time teaching while also serving as president of Spelman. She mentioned her work  serving on the scholarly advisory committee for the NMAAHC.

After the presentation, we took time exploring the museum. What a truly spectacular and extraordinary place. The NMAAHC traces all kinds of threads of African American history, struggles, and contributions to this country. It was fitting that we got a chance to visit this outstanding monument to black history and culture as we reflected on the 30 years of UNCF/Mellon programming.


During the conference, there was adequate time for fellowshiping, for catching up with old friends and making news ones. I realized that those broad and diverse networks Mellon introduced me to were soliddying and growing at this recent conference.

Related:
• Scenes from the UNCF/Mellon Conference]
Posted by H. Rambsy at 12:25 PM