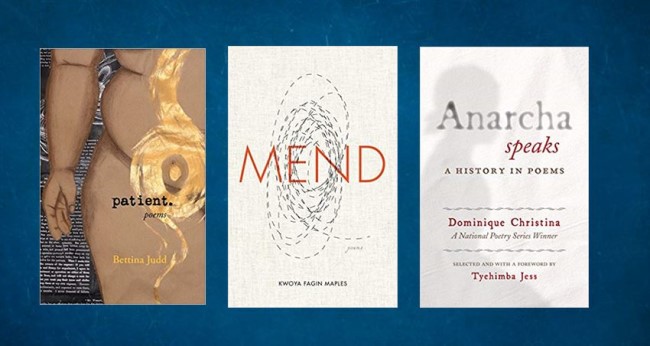 As they have always done, African American poets today often write about under-discussed issues that later emerge in mainstream conversations. Whether this indicates that black thinkers continue to serve as canaries in the coal mine of American culture, or that these poets directly generate that attention, is up for debate (likely some of both).

One topic that is at last a subject of some major conversation, but that black poets had already been addressing, is the racist history of gynecology. Public discourse about the field’s so-called father J. Marion Sims was furthered by discussions about memorials post-Charlottesville. A statue of Sims was removed in April 2018, after protestors highlighted the context for Sims’s medical developments. For his groundbreaking research relied on experiments performed on enslaved women without anesthetic or consent from 1845 to 1849 and on his forcible employment of other enslaved women as medical assistants.

Scholars have thoroughly explored the history of medical experimentation on black women and Americans. Invaluable texts include: Harriet Washington’s overall study Medical Apartheid: The Dark History of Medical Experimentation on Black Americans From Colonial Times to the Present; works generally illustrating that slaveholders’ investment in the gynecological health of the enslaved was purely economic, like Sasha Turner’s Contested Bodies: Pregnancy, Childrearing, and Slavery in Jamaica; and Deirdre Cooper Owens’s Medical Bondage: Race, Gender, and the Origins of Modern Gynecology.

Alongside and drawing on that research, black poets too are essentially revising this history. Bettina Judd’s patient.:poems (2014), Dominique Christina’s Anarcha Speaks (2018), and Kwoya Fagin Maples’s Mend: Poems (2018) each give voice to those women exploited by Sims. I here look briefly at three parallels between them.

All three gesture—like most historically-focused black poetry—toward connections between this history and the present relationship of black women to the medical establishment, generally and with gynecology/pregnancy. Kwoya Fagin Maples makes this connection between past and present explicit: “Dear reader, here is my wish: that you would consider how this story relates to now. Presently in 2018, black women are three times more likely to die after childbirth than white women, regardless of ability to pay and regardless of prenatal care” (xi-xii). These collections were published against a backdrop of (some) attention to the black maternal mortality crisis and healthcare’s maltreatment of black women, thanks in part to celebrities like Serena Williams and Beyoncé.

All three deploy formal experimentation to affect their ethical mission of attempting to grant these women agency. Conventional historical and poetic representation have silenced disempowered figures or stripped them of agency. By contrast, Judd, Christina, and Maples strive to respect the unknowability of these pasts, while rendering imaginative versions of those experiences. This results in poems that violate syntax, lineation, layout, capitalization, and other visual indicators associated with mainstream American poetry. These disruptive aesthetics help explain why these texts are not (yet) accruing the attention I argue they deserve.

Finally, all three thematically advance efforts to highlight both white complicity with these issues, and the inadequacy of conceptions of agency in studying the enslaved. Maples for instance writes poems in the voice of Sims’s wife to illustrate the former and of one of his assistants to illustrate the latter. In parallel, the ambiguous titles of patient.poems and Mend demonstrate the inescapable contradictions of this kind of work. Judd’s titular traumatic experiences as a black female “patient” prompted her to begin these poems—yet this word simultaneously evokes common efforts to thwart social change via urging the disfranchised to wait “patient[ly].” Maples’s title (and collection) urges “mend[ing]”—yet shows such repair to be impossible.

These works merit further discussion as contributions to conversations around black women’s health, and to the tradition of historically-informed African American poetics. Judd, for instance, maintains an online archive of resources related to patient.poems designed to highlight its pedagogical utility. As such, these short ruminations will, I hope, be a mere precursor to a larger project on these works as critical interventions into the past and present of black poetry grappling with history. So I welcome all feedback.

-----------
Laura Vrana is assistant professor of English at the University of South Alabama whose research and book in-progress center on contemporary black women’s poetics.
Posted by H. Rambsy at 7:32 AM