Back in February 2018, I was thinking about Killmonger. I had seen Black Panther, and I was moved by Michael B. Jordan's performance as T'Challa's nemesis. I had been doing research on the creative power of bad men in creative works, and the significance of Killmonger advanced some of my ideas.

Well, here we are a year later, and Killmonger is on my mind again. Really, I've been thinking on the figure for the last few months, as I'm following writer Bryan Hill and artist Juan Ferreyra as they've been producing a series for Marvel on the Black Panther villain.

It's a mini-series that will only contain 5 issues. They're up to #4 so far. In just a small number of works, they've produced outstanding work.

I first discovered Hill with his work on the mini-series Michael Cray, which was a spin-off from the larger story-line with The Wild Storm. I thought the work was solid, and so I took note when Marvel announced that there would be Killmonger series.

Killmonger takes us in a different direction, though, for a couple of reasons. For one, we're getting an in-depth story on a villain, a black villain. That's not something we get everyday.

It's common to have Joker and Lex Luthor backstories. It's not difficult to come across extended work on Magneto and Doctor Doom. But an extended past for a black villain? Nah, folks have mostly passed on that.

This Killmonger story is also unique as far as current Black Panther series go because of the New York setting. It's not been unusual to see T'Challa in New York. He was there in Black Panther & the Crew, and in some past iterations of Black Panther. But in issues #1 - #3, Hill and Ferreyra really made use of the setting in the city.

I in fact think that the city setting gave the story an energy that it would not have had by having the story set somewhere else, including Wakanda. Ta-Nehisi Coates has done really important work, giving us a fuller sense of the geography of the fictive African nation. Yet, as I've learned following Killmonger, New York City, as a setting and place in our imaginations, creates all kinds of possibilities for comic book writers and artists.

For one, it's easier to have appearances from various other superheroes and villains. In one issue, Bullseye appears out of nowhere and causes havoc. His appearance would've seemed less plausible in other environments.

The city environment also makes multiple viewing angles possible for artists. Hill and Ferreyra really maximize some of those possibilities too. There's a sense early on in the series when a group of mercenaries jump through a window in apartment where Killmonger is staying. The tight confines and the familiarity of the city room give the scene power.

I wasn't fully aware of Ferreyra's work prior to Killmonger. I had glimpsed his artwork here and there, but it was this series that led me to sit up and really pay attention. What he's doing with double spreads and just with the drawing and coloring in general has been moving. 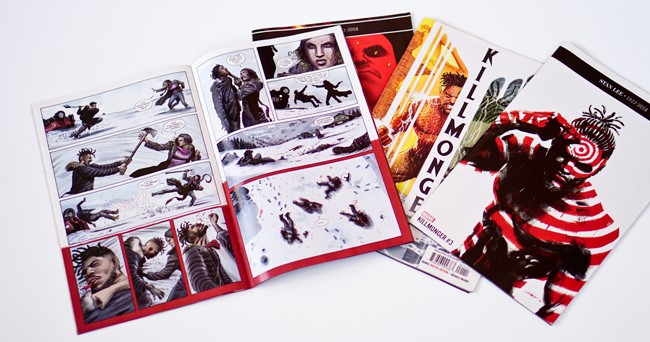 Over on Twitter, Ferreyra regularly presents drafts and completed versions of his drawings on different titles. He produces wondrous work. It's been a delight just looking over his many creations.

On Killmonger, we have Hill and Ferreyra bringing their talents together. The results that we witness with each book are a combination of skilled creators converging on this common

The other day as I was drafting notes for this post, I noticed a comment from Hill on Twitter. He noted that "confrontational work makes my escapism better. Sometimes, I have to get dirty." He was referring to American Carnage, but to the extent that Killmonger is confrontational as well, I think the character necessitates Hill getting dirty.

One place where the work gets confrontational is in Killmonger's building anger. There are close-ups in #4, where Killmonger has been betrayed and hit in the face. He's preparing to respond, and we see his gritting, blood-stained teeth and face. It's an audacious image. The kind of image that recalls some of the close-ups of the Joker, but here, we're seeing an enraged black man.

Hill and Ferreyra are doing amazing work here. They're breaking new ground on the representation of a black villain and a black man in comics. It's been fascinating watching this work unfold.