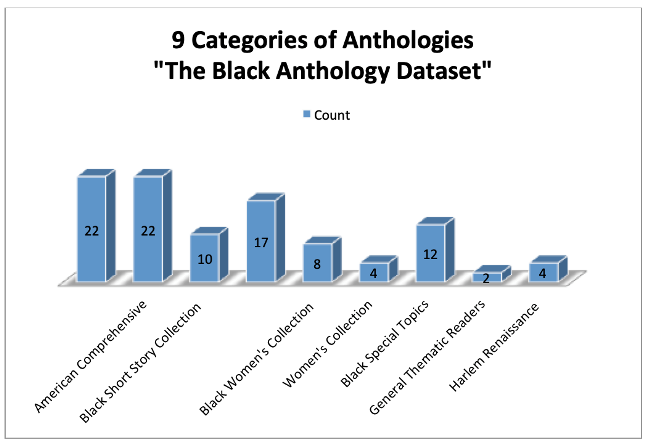 The “Black Anthology Dataset” represents my efforts to collect anthologies that include short fiction by black writers. Even though all the anthologies contain short stories by black writers, the dataset contains various types of literary collections. To distinguish between the various contexts that black short stories circulate, I created various categories to assign to the different anthology types. My dataset includes 9 kinds of anthologies:

• Comprehensive American collections include writers from multiple racial and ethnic backgrounds, though most of the writers have historically been white.

• Special Topics Black Women Writers Collections focus only on black women’s writing and include anthologies such as The Black Woman: An Anthology (1970), The Sleeper Wakes: Harlem Renaissance Stories by Women (1993), and Revolutionary Tales: African American Women's Short Stories, From the First Story to the Present (1995).

• Special Topics Black Literature Collections contain writings by black writers focusing on distinct genres or on special topics such as mystery, sci-fi, black identity with anthologies such as A Native Son Reader (1970), The Opportunity Reader (1999), and Gumbo: a celebration of African American writing (2002).

• Special topics Women Writers Collections are devoted to works by women from a variety of racial and ethnic backgrounds. Women Working: An Anthology of Stories and Poems and The Norton Anthology of Literature by Women (1985) are included in this category.

• Special Topics General Collections are multiple genre collections that contain both American and international writers. The Riverside Anthology of Literature (1996) and Literature Across Cultures (1998) are included in this category.

These various categories of anthologies assist us in managing the large number of available collections. The categories also address some of the general aims of the books. Editors of Harlem Renaissance collections highlight prominent and lesser-known works by writers of that particular era. Black Women’s collections advance the idea that writings by black women constitute distinct frames or kinds of writing, and sometimes even include works that do not appear in comprehensive black or American collections. Ultimately, recognition of anthology categories means acknowledging distinct types of collections similar to how we identify types of literature – poetry, novels, essays, short stories, etc.