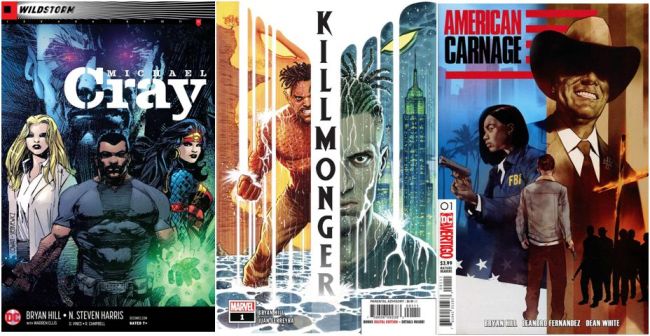 Bryan Hill was one of the writers I began reading in earnest this past year, and this entry is really a place-holder, just a heads up saying I hope to blog about him more in 2019. For now, I didn't want the year to past by without me noting the experience of reading his works in 2018.

I first encountered Hill's writings in 2017 with his work on the comic book Wildstorm: Michael Cray. He got started long before then though, doing work on Postal, 7 Days from Hell, and Broken Trinity:Pandora's Box, among others. Beyond comics, he's worked as a writer on the show Titans. He wrote an arc for Batman: On the Outside in 2018, which I plan to read next month.

What I did read this year was his conclusion to Wildstorm: Michael Cray, issues 4 - 12. I thought it was a really solid run, so I was excited to see Hill writing additional titles. He's now writing the comic book American Carnage about a disgraced FBI agent who goes undercover to infiltrate a white supremacist group. Hill is also two issues into a miniseries on Killmonger, a key villain from Black Panther.

I've lived in St. Louis for the last 15 years now, and I'm always on the lookout for writers from the area to read and highlight. Turns out Hill grew up in here. Another connection: I noticed that he named the main character from American Carnage "Richard Wright." I've read, taught, and blogged about Richard Wright and his works for many years now, so I was amused to see him show up in name with Hill's comic book.

I was one of those folks who thought that Killmonger was really the crucial highlight of the Black Panther film. Without a villain like that, what would the movie have been? So I'm glad to see Hill fleshing the character out in this miniseries series. In some ways, bad man figures were the connective thread for Hill's three works: Killmonger, American Carnage, and Michael Cray.

The exploration of villainous characters or protagonists who are required to break the law or pursue morally ambiguous activities to achieve desired outcomes has been integral to the creative output for a range of black men writers. I thinking of Adrian Matejka's and Tyehimba Jess's volumes of poetry on Jack Johnson and Leadelly, respectively. Paul Beatty's The Sellout (2015) and Colson Whitehead's The Underground Railroad (2016).

All of this is to say that among other things Bryan Hill is exploring subjects that connect to a variety of works by other black men. So reading him was a new experience but also one that resonated across topics I've been thinking about for some time.