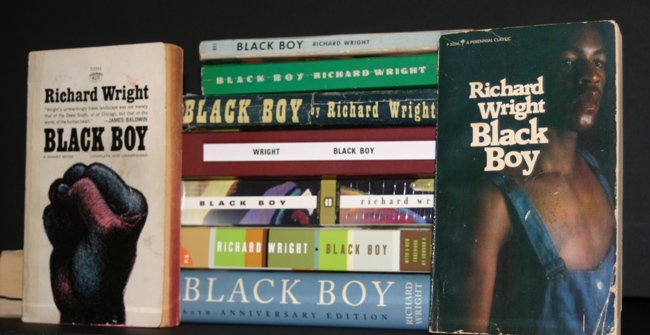 Last week, I was reading Patrick T. Reardon's profile on Haki Madhubuti and noticed mention of a narrative I've heard from Madhubuti before concerning his discovery of Richard Wright's Black Boy.

When Madhubtui was 14 years old, his mother sent him to the library to pick up Wright's autobiography. He was somewhat embarrassed about a book with "black" in the title. "So when he found a copy of Black Boy," writes Reardon, "instead of checking it out, [the young Madhubuti] skulked to a table where he started to read. And he couldn't stop reading."

Madhubuti informed Reardon that "Black Boy saved my life. It slapped me on every page I read, especially in the misery I was experiencing. For the first time, I was reading literature that was not an insult to my personhood." Reardon observes that Wright's book propelled Madhubuti "on an odyssey of reading every black thinker and writer he could get his hands on."

Reading about Madhubuti reminded me of Ta-Nehisi Coates's memoir The Beautiful Struggle (2008). In the book, he reflects on the experiences of his father, Paul Coates, and recounts an incident when his father was in the military and stumbled across a copy of Black Boy that someone had left on a table.

"In Richard Wright, Dad found a literature of himself," observes Coates. "From Wright he learned that there was an entire shadow canon, a tradition of writers who grabbed the pen, not out of leisure but to break the chain."

Haki Madhubuti and Paul Coates would go on to found Third World Press and Black Classic Press, respectively. Wright was hardly the only reason they pursued those ventures, but he was integral to their developing and ongoing consciousness.

Related:
• A Notebook on Richard Wright
Posted by H. Rambsy at 5:20 PM

your citation is so true. Wright opened a whole new world for me. as you cite it was the same for Haki. Glad to give Wright the credit due for tapping to Black publishers on the shoulder and having us pay more attention to our world and our perspective. interestingly Ta-Nehisi moderated a discussion between Me and Haki in Chicago and he asked us both to talk about how we found Richard Wright.
W. Paul Coates

Interesting article. The conversation between Coates and Madhubuti must have been epic!