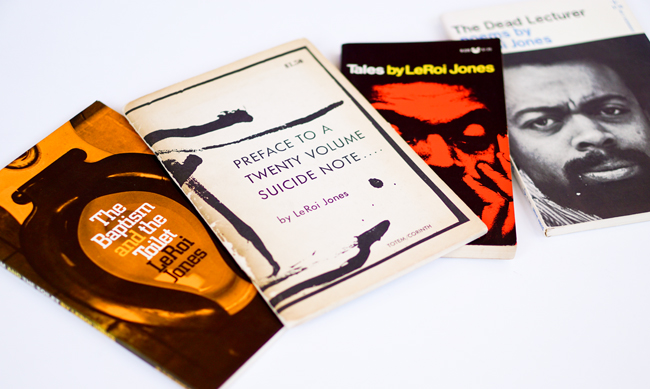 Back in July, when I wrote about Amiri Baraka's three most anthologized, I based my findings on a dataset of 50 anthologies. I now have a dataset of 120 anthologies, published between 1960 and 2018, that include Baraka's poems. The larger number of collections caused a shift in the poems that represent Baraka's most frequently reprinted poems.

Among the anthologies I consulted, Baraka's five most anthologized poems are:

A substantial increase of anthologies in my dataset led to important changes in my findings.

One reason that "An Agony. As Now" appears as much as it does it because I include multiple editions of some anthologies. The editors of those books tend to use the same Baraka poems over and over again. The Heath Anthology of American Literature for instance continuously includes "An Agony. As Now."

Notice that those top 5 poems were all published prior to 1970. That reflects a pattern with the overall dataset where editors primarily publish Baraka's early poems. Indeed, 63% of Baraka poems that appear in anthologies were first published before 1980.

Although he was an active and prominent force , continually producing new work for more than 50 years, Baraka is often, though not always, represented by poems he composed during the early phase of his career. That's not uncommon. Langston Hughes's "The Negro Speaks of Rivers," Gwendolyn Brooks's "We Real Cool," and Margaret Walker's "For My People," for instance, are among their early and most anthologized works as well.

Nonetheless, given that editors regularly highlight Baraka's shifts in politics, poetics, and names, it stands out to me that editors so often reprint his LeRoi Jones poems.

Related:
• A Notebook on Amiri Baraka
Posted by H. Rambsy at 7:52 AM