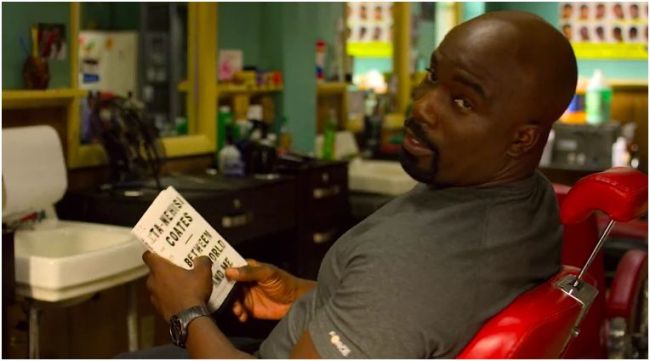 A few years back when Ta-Nehisi Coates's book Between the World and Me was released, I tracked the coverage in various online publications. Recently though, I've seen the book cited in cinematic representations.

First, near the beginning of season 2 of Luke Cage on Netflix, we see the protagonist reading a copy of Coates's book. Through season one, Luke Cage was shown reading or possessing various books. So now Coates has entered the realm.

And now, just recently, I went to see The Equalizer 2, starring Denzel Washington. The film opens with Robert McCall (played by Washington) riding a train in Turkey and reading a book -- Coates's Between the World and Me. Later in the film while assisting a young black man become more educated, Mr. McCall gives the young man a copy of Coates's book to read.

In Luke Cage and The Equalizer 2, Coates's book is used to signal the consciousness or studiousness of the two main characters. How do you convey through silent cues that your main character is an intelligent black man, the filmmakers may have asked? Well, let's show him reading Between the World and Me.

Related:
• A Notebook on the work of Ta-Nehisi Coates
• Book History
Posted by H. Rambsy at 8:18 AM