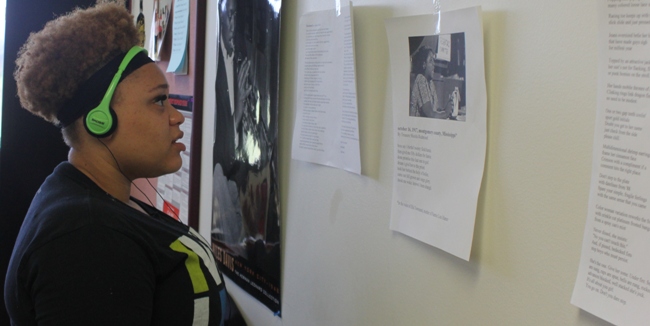 The literary scholar Jerry W. Ward, Jr. was recently raising a question, prompting me to think about general audiences: "What do we find proof of in print and online sources that are not in 'prominent scholarly journals?'" His question responded to something I had previously noted about the topics academics covered in scholarly contexts. But what about, Ward was asking, audiences, especially black general audiences, beyond the scholars? (It's worth noting that Ward has been actively formulating questions and making observations about those black audiences for over 35 years now, like his inquiry, "why do Black readers read what they read when they read?"

One body of evidence on responses to black poetry might be in the realm of what is broadly referred to as spoken word. It's likely, by the way, that the term "spoken word" inadequately captures the shifts in that discourse over the last two decades. To respond to Ward's initial question though, we find proof of audiences in those spoken word areas who find value in vocally complex or dynamic performances on subjects that are biting, serious, and comedic.

With few exceptions, award-winning black women poets in spoken word environments are largely separate from award-winning black women poets who are praised often praised based on their volumes of poetry and close proximity to powerful institutions, like universities and fellowship and prize-granting organizations. Those spoken word poets remain invisible to many scholars who use books as their main sources for studying and teaching poetry.

I was aware of spoken word artists many years ago while in undergrad, but I have remained mindful of the emergence of new artists based on my communications with mostly my black women students. When and if I present my classes with works by canonical poets like Gwendolyn Brooks and Sonia Sanchez, or contemporary writers like Evie Shockley and Elizabeth Alexander, my students listen and take notes. However, whenever I present work by spoken word artists, individual black women students will approach me after class, suggest additional spoken word artists to consider, and later email me a YouTube link or two of the poet they have in mind. (As a contrast, my black men students tend to email me YouTube links of underground rappers that they think I should consider).

Over the last few years, black women students sent me dozens of YouTube links of their favorite poets. Relatively few of their favorite poets were over the age of 30, and none of those poets are among the canonical poets discussed in the scholarly discourse, nor are any of those poets the dozens of award-winning black women poets I've charted in past entries.

The very act of students emailing their professor YouTube links of black women poets "you should hear" provides proof of a distinct technological mode of sharing poems. The links they provide me show black women poets reading at slam competitions or at local venues for poetry. The readings themselves are often interrupted by shouts, vocal affirmations, and laughter when the poets make powerful or biting statements, providing evidence that readings in these environments are interactive and sometimes rowdy. The readings, in other words, are a contrast from the quiet, staid poetry readings that occur in academic contexts.

It's not just the performance styles though. Those favorite poets that students pass along tend to address the dramas of being black women in contemporary environments in ways that leading poets in academic contexts don't, at least not as much. For instance, in one of her poems, Jae Nichelle catalogs the cruel insults expressed by black and white people about her lips. Emi Mahmoud opens her poem "Mama" by recalling the ways that a man on the streets tried to disrespectfully flirt with her.

Listen to enough of poets in these realms, and you get a sense that expressiveness, righteous rage, humor, and contemporary interactions between black men and women are central aesthetics and themes. The emphatic and diverse delivery styles also suggest why many of my black women students find the poetry boring that they are exposed to by high school teachers and college professors. While I respect the work that we -- teachers and professors -- are doing, I admit that so much of it is relatively flat in comparison to the kinds of poetry that the students value.