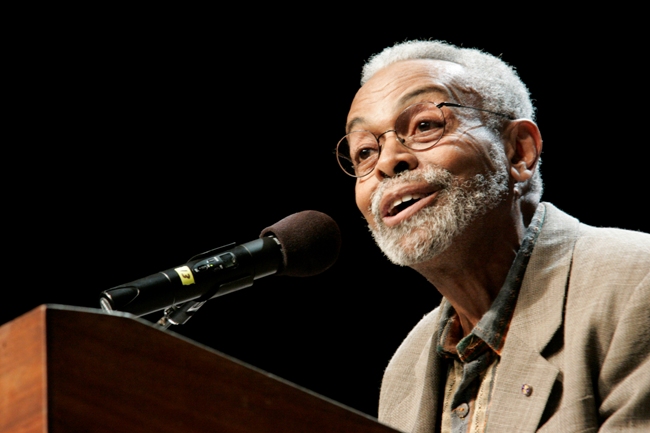 People often make the point that the Black Arts Movement, a politically charged artistic and cultural enterprise of the 1960s and 1970s, served as a precursor to hip hop. I mostly agree. What's less discussed is how particular poets developed styles that corresponded directly to what we witness with rappers.

Three poems by Amiri Baraka -- "Dope," "Digging Max," and "Jungle Jim Flunks His Screen Test" -- often put me in the mindset of some of my favorite freestyles in rap music. Notably, Baraka, a leading force in 1960s and 1970s black creative culture, produced those three poems after the Black Arts era.

Baraka's extended, somewhat uninterrupted flow in performances of "Dope," "Digging Max," and "Jungle Jim Flunks His Screen Test" is a powerful display of a lyricist demonstrating his ability to run down a string of words at fairly rapid paces.

"Dope" is approximately 900 words, "Digging Max" is  about 444 words, and "Jungle Jim Flunks His Screen Test" is about 683 words. Baraka doesn't slowly and carefully read through each word, which is by far the norm for many contemporary print-based poets. They perform what is known as "poet voice," an approach to reading characterized by a monotonous incantation. Poet voice is linked to European church practices, which makes the irony of Baraka rejecting that approach in his poem "Dope" all the more ironic and fantastic.

In performances of "Dope," Baraka shouts, makes wordless phrasings, moves dramatically. He even includes the performance note to himself in the poem that reads "(Goes on babbling, and wailing, jerking in pathocrazy grin stupor)." Baraka mocks and draws on the performance styles of black preachers. Doing so allows him to emphatically reject poet voice and embrace a style that is more in line with what we view in rap freestyles.

Show up to a rap set and try poet voice, and you'll likely be booed off the stage. By contrast, if you get up showing the kind of breath control and powerful, varied cadence that Baraka does in "Dope," Digging Max," and "Jungle Jim Flunks His Screen Test," and you'll receive widespread praise. Rap discourse respects and values the expertise of talented verbal artists.

If you listen to the online version of "Jungle Jim Flunks His Screen Test," you won't catch the full range of his delivery capabilities. Here, he's reading somewhat slow and deliberate to match his accompanying saxophone player. I saw Baraka read the poem live. Let me tell you, while it took him 8-plus minutes to read the same poem with the saxophonist, he read it in just over 4 minutes when he set his own pace. In other words, he ran through those same 680 words in half the time.

Baraka's rapid pace, varied cadence, intentional shifts in tonalities, and dramatized presentation style align him with rappers in ways that is far less common in the world of formal poetry.

Related:
• A Notebook on Amiri Baraka
Posted by H. Rambsy at 9:17 AM