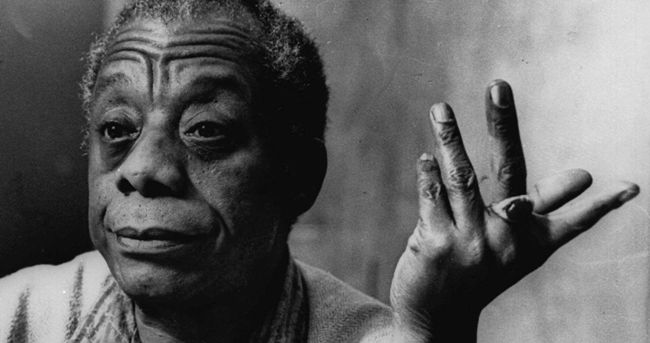 My time at the Dallas Institute teaching “Reading James Baldwin in the Digital Age” has made me consider how online resources play a vital role in shaping conversations about the late literary figure. In my last class, I discussed Baldwin’s online presence and used Google Trends to track the frequency at which people did internet searches for the writer.

Around February 2016, there was a spike in Google searches on Baldwin. That spike coincided with the release of the film I Am Not Your Negro directed by Raoul Peck that focused on Baldwin’s unfinished manuscript, Remember this House, about slain civil rights activists Medger Evers, Malcolm X, and Martin Luther King, Jr. 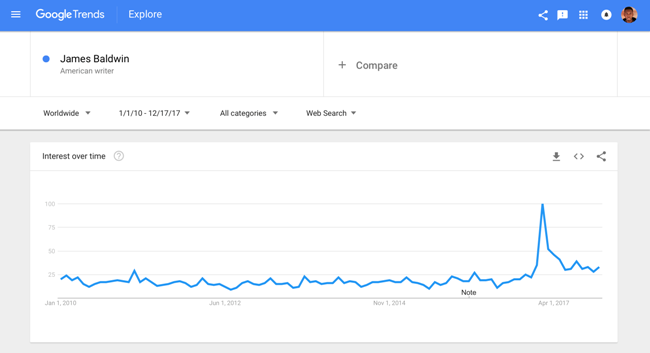 After pointing out this observation, many attendees in the audience noted how after seeing the movie, they were encouraged to go and read Baldwin’s essays. In short, the movie stirred an interest in Baldwin. I was not surprised by this revelation. Movies have played a significant role introducing wider audiences to black writers. The film The Color Purple certainly raised the visibility of Alice Walker and her work, and adaptations of A Lesson Before Dying and Their Eyes Were Watching God prompted additional interest in Ernest Gaines and Zora Neale Hurston, respectively.

I used Google Trends to reveal the top 5 related searches and queries related to Baldwin. Many of the search returns reflect people’s interest in the movie. In the related topics, “Documentary film” is the top searched item and in the related queries, “i am not your negro” ranks as number one.

Some people were surprised to see contemporary writer “Ta-Nehisi Coates” rank second among the most searched topics. I noted to audience, however, that that Toni Morrison had provided a blurb, which circulated widely, for Coates’s Between the World and Me (2015). The blurb linked Coates to Baldwin, as Morrison wrote: “I've been wondering who might fill the intellectual void that plagued me after James Baldwin died. Clearly it is Ta-Nehisi Coates.”

Another finding that stood out was the fifth “related query.” The phrase “buckley baldwin debate” references one of Baldwin’s most popular YouTube videos. The 1965 debate has received over 1.2 million views since being posted 5 years ago. This past February, I created a post where I highlighted 10 James Baldwin speeches and interviews on YouTube.

Like many entertainers, celebrity personalities, and politicians, YouTube has also played a pivotal role in bringing attention to writers such as Baldwin. The fact that we have so many videos that showcase Baldwin’s personality contributes to his online popularity. Moreover, these videos have introduced younger generations to Baldwin.

Overall, I used Google Trends to provide a glimpse of how online sources might influence our current conceptions of Baldwin. This last class gave participants an indication of how the internet might influence how we understand, search for, and consume the works of major writers.