On November 30, I coordinated an exhibit for students based on book publications by Octavia Butler, one of our most well-known writers. In some respects, the exhibit was about contemporary book history, in this case, the presentation of Butler's books. The exhibit was also an extension of previous projects I've done studying and displaying aspects of the designs of Butler's books.

Relatively few African American writers have as many books in print as Butler. In addition to releasing her books individually, the series that she produced appear together in single volumes or compilations. Butler published her first novel Patternmaster in 1976, and her last novel Fledgling in 2005. The sci-fi themes that define Butler’s works as well as her inclination to sometimes compose series gave her publishers reason to produce an assortment of interconnected book cover designs for the novels.

The cover designs for Butler's works -- published and re-issued over the decades -- display a variety of visual aesthetics. Early on, her publishers were marketing her books to white men readers, who were a core target for science fiction. Later, her publishers were marketing the books to black women readers, a core group for African American literature. 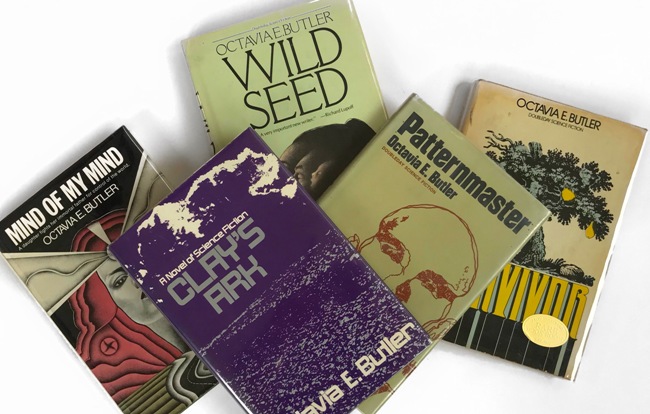 Butler's first interconnected work was the Patternist series, which includes the novels Patternmaster, Mind of My Mind (1977), Survivor (1978), Wild Seed (1980), and Clay’s Ark (1984). The cover designs for the first editions are not necessarily related. However, years later when published reprinted the works, they often did so by producing books with common colors and book spines. 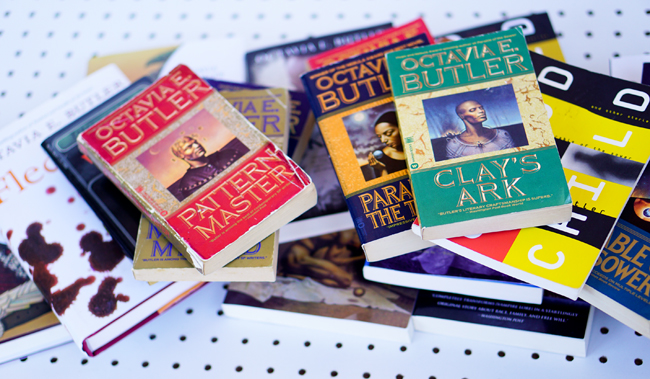 The publishers expected the novels in the series to appear next to each other on shelves in bookstores and in homes. Beyond the content of her novels, I first became intrigued in Butler book history after recognizing the variety of covers for the Patternist series.

I began creating small displays and blog entries based on those Patternist series covers. Over time, I realized that the pattern of interconnected Butler covers extended across several other titles by the novelist.


After its publication, Butler was displeased with her novel Survivor. She felt that the book corresponded to too many sci-fi novels that celebrated a kind of pro-colonization theme. She self-critiqued her book, referring to it as her "Star Trek novel." As a result, she chose not to have the book reprinted.

Thus, the compilation of the Patternist series, Seed to Harvest (2007) does not include Survivor. When contemporary readers encounter the compilation, if they read the book from start to finish, then they are reading the series in narrative order: Wild Seed, Mind of My Mind, Clay's Ark, and Patternmaster. The books were initially published out of sequence, as noted above.

In 1995, Butler’s short stories were published in the collection Bloodchild. In 2000, Butler published the volume Lilith's Brood. That compilation included her novels Dawn (1987), Adulthood Rites (1988), Imago (1989), which were initially collected in a single volume, Xenogenesis.

The various collections -- Bloodchild, Seed to Harvest, and Lilith's Brood -- created opportunities for readers to cover Butler’s separate narratives or individual stories as a united whole in a single book. Moreover, the compilations reflect the interest among publishers of making Butler’s series accessible for classroom use, presenting multiple novels together in one book.

And what about Butler's most well-known book, Kindred (1979)? The book combines a narrative about slavery with time-travel, two prevalent topics in African American literature and science fiction. The combination of those topics contributes to making the novel so fascinating for readers. 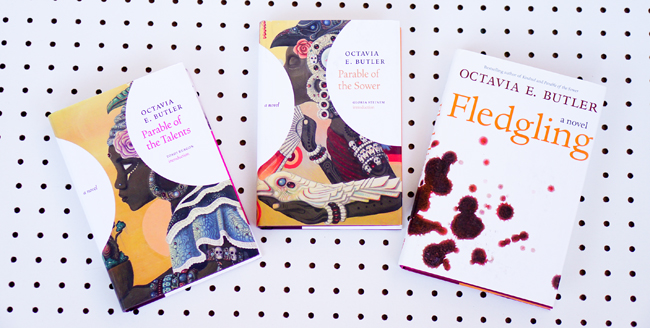 And there are more books. We now have fairly recent issues of Butler's Parable of the Sower (1993) and Parable of the Talents (1998). Those two books, known as the Parable series, have related covers. There are also now a couple of different prints of Butler's last novel Fledgling.

The field of Book History often concentrates on works published in the 19th century and early 20th century. The Butler covers, however, suggest that there might be useful lines of inquiry that can emerge concerning the publication of books by a modern, black woman science fiction writer.