The fabulous artwork of Accell


The energetic, fabulously colored artwork for Accell published by Lion Forge creates a wild viewing ride that moves with all the kinetic force of the main character. On the one hand, Accell is about the saga of a hero with supernatural speed. At the same time, this comic book is about a group of artists collaborating to produce really outstanding artistic compositions.

Accell is written by Joe Casey, penciled by Damion Scott, inked by Robert Campanella, colored by Sigmund Torre, and lettered by DC Hopkins. This book, like Noble, Superb, and other series in the Catalyst Prime universe, are edited by Joseph Illidge. 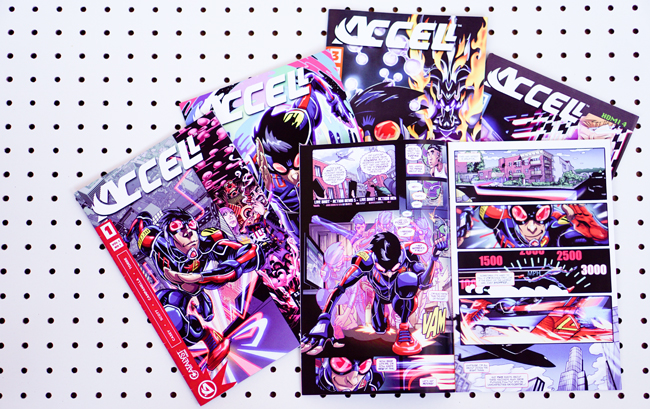 Various commentators have recognized the stunning look of Accell as well. In a review of issue 1, Brett Schenker noted that the book has "a look that crackles with the enthusiasm and attitude of the writing within." Nicholas Palmieri points out that "for my money, Damion Scott is the real star of Catalyst Prime: Accell. Not a page goes by without him employing some device to make the page more exciting." Scott's "graffiti influence imbues the action scenes with a non-stop kinetic energy," writes Palmieri. Further, "Campanella’s inks reinforce Scott’s visual style," and "Torre uses a saturated palette also reminiscent of graffiti, with most characters and objects given a clearly defined main color, shadow, and highlight."

For Accell, Scott, Campanella, and Torre have been continually finding exciting answers to the question: how do we produce artwork to convey the adventures of an incredibly fast superhero? For decades now, artists have been finding ways to produce artistic responses to that question with respect to the Flash, Superman, and Quicksilver, to name a few. Thus, Scott, Campanella, and Torre join a long line of creators.

Daniel Dos Santos, the protagonist of the book who goes by the name Accell, is Latino. So we get an opportunity to consider a speedster from the perspective of someone other than a white male lead. That ethnic diversity coincides with the broader Catalyst Prime universe that has an unusually large number of racially diverse creators and characters.

Daniel is playful and "faster than the speed of thought." The artwork for the book tries to convey those qualities. The vibrant reds and blues, the blurred images, the lines rushing around people and objects, the bolts of fire all connote the speed and intensity of the book.

The exaggerated figures and many different facial expressions signal a cartoon effect that propels the fun of the book. There's some deliberate crowding of images and action on individual panels that require second and third and fourth looks to grasp all the stimulating moving parts.

Related:
• A Notebook on comic books
Posted by H. Rambsy at 3:13 PM