In 1934, when the novelist Zora Neale Hurston received a selection of photographs that someone had taken of her, she offered a few different responses. Assessing the images, she said, “I love myself when I am laughing. … And then again when I am looking mean and impressive.”

Hurston’s self-assessment served as a basis for an exhibit I curated on November 29. The exhibits consisted of a selection of self-portraits and selfies produced by SIUE students. One student, Victoria Green, an artist, shares some of her self-portraits. Other students -- Rae'Jean Spears, Amelia Williams, and Nakia Smith -- agreed to take dozens and dozens over the last couple of months and then present a sample of the images for this exhibit, "I love myself when: Black women, self-portraits, and selfies."

The project extends two previous visual art exhibits that I curated. In 2014, I curated "A Gathering of Black Women Artists," and in 2016, I curated "Untitled: A Gathering of Black Women Artists." And there's a longer history. For years now, I've tracked and sometimes produced exhibits focusing on the stylistic approaches of black students at the university. This current exhibit extends some of those interests.

“Why not draw me?”: Self-portraits by Victoria Green

Victoria Green is a first-year student and artist. Last year, she worked on a project where she produced self-portraits. For years, she had avoided portraits of herself and others. But eventually, after drawing various other subjects, she asked herself the question “why not draw me?” That led to a series of self-portraits. Victoria completed several different portraits, frequently shifting the colors as she explored various approaches to representation. Victoria noted that after taking the time to look at herself so long while producing the paintings, she noticed "flaws." She also discovered something about herself that she really like to draw: her ears. It's the first thing she focuses on, she said, when she draws a photograph of herself.

Rae’Jean Spears is a creative, curious black woman. She’s pursing graduate studies in English here at SIUE. The selfies she took for this assignment constituted only a fragment of the images she snapped over the last month. She was primarily taking images of new food she was trying, places she visited, and venues she found interesting. During the course of taking several selfies though, she really began to focus on her head posture in the images. “I noticed that I always tilt my head in selfies and I'm curious if that is my usual disposition when just talking to people,” she said.

What else did she discover in the process of taking selfies? “I learned that even though I took a variety of pictures (make-up/no make-up, natural hair/weave, outside/inside), I have a very similar look in all of my pictures. I've always called myself a creature of habit and that definitely shows through this set of pictures.”

Nakia (Nikki) Smith is a first-year student at SIUE. Beyond her formal major in business marketing, she has interests in participating in performances in theater at SIUE. She participates on a dance team at the university and is thoughtful about fashion and styling. She wanted her selfies to display the different settings and moods she was in. She also added effects to several of her images. In the process of working on this project, “I realized I do not take a many selfies as I thought,” she said.

Amelia Williams is a biological sciences major and has been an active member of various student organizations, including as a member of the Black Student Union and the Cougar Village Area Council. After taking so many selfies over the last month for this project, Amelia said, “I became more comfortable with my appearance.” She also noted that she likes “taking selfies with other friends, as opposed to alone.”

She says she was especially interested in capturing the various activities that participates in and her weekly hobbies. She has images of her drinking hot tea, another shopping, and another reading a book. “ One of my favorite displays my Afro because I am comfortable with my natural hair and its versatility.” Finally, she said, “As a photographic subject and self-photographer I learned more about my angles, lighting, and most importantly to continue embracing who I am as a person.”

Attendees really enjoyed the exhibit. They posed questions and took photographs of the images they viewed. Many of them were deeply interested in a display about self-portraits and selfies.

The exhibit had me thinking even more about the intersections between autobiography, technology, and self-portrait. I also gave some thought to the idea of art and politics of selfies.  It's not everyday that you convince about 250 viewers on a college campus to consider the self-portraits and artistry of a small group of black women. But here was such a moment. 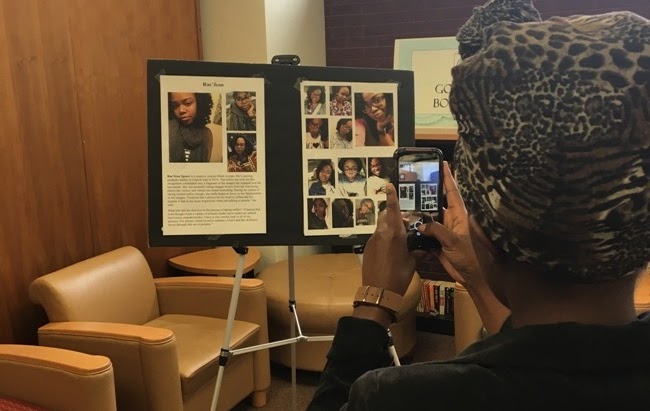