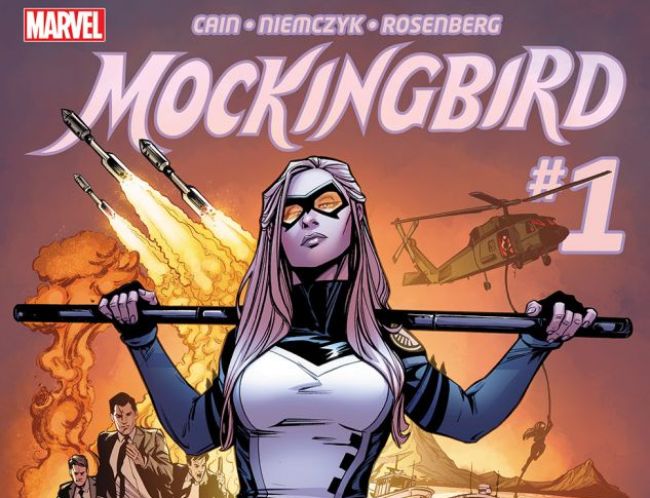 I'm not sure when I first discovered writings by Elana Levin (who also goes by Elana Brooklyn online), but she's been a wonderful guide for my journeys through the lands of comic books, and really through a range of other subjects. So why not share her knowledge with my students? Today, in one of my classes, we covered Levin's article "Mockingbird is There for Us: Who Will Be There For Her Writer?"

The students in the class are all first-year African American women. The article gave us all kinds of topics to consider. Off the top though, a few different students expressed intrigue with Levin's observation that Chelsea Cain and Kate Niemczyk's Mockingbird characters are "sexy and not objectified." We spent some time talking about what a sexy, non-objectified representation might entail.

In her article, Levin also points out that Cain was the target of online harassment in part because "fake fanboys" felt threatened by the content of Mockingbird. "Practically every issue," writes Levin, "addresses sexism in some way and every issue features Bobbi standing up for women and girls." Only two of the students in the class identify as comic book readers, so most of the class was initially having a hard time understanding why people would antagonize Cain. "Have any of you ever had to struggle to have guys respect your opinions about rap music?" I asked. Oooohhhh, they responded, acknowledging that it made sense when I put it like that.

Some of the students noted that Levin's article was the first time that they've discussed feminism in a classroom context. Furthermore, at universities, feminism is usually discussed in relation to political movements and literary texts. I've been thinking about the significance, then, of introducing first-year students to feminism by way of a discussion of comic books.

A couple of weeks ago, we read and discussed a piece by the Blerd Gurl about Marvel's inadequate diversity efforts. Levin's article allowed us to stay on comics but move in some new directions.

In addition to serving important purposes for today's class, the discussion was also preparation for another future conversation about comic books. I'll cover Levin's article again next week in a different, much larger class. I'm interested in where the discussion among slightly older students.