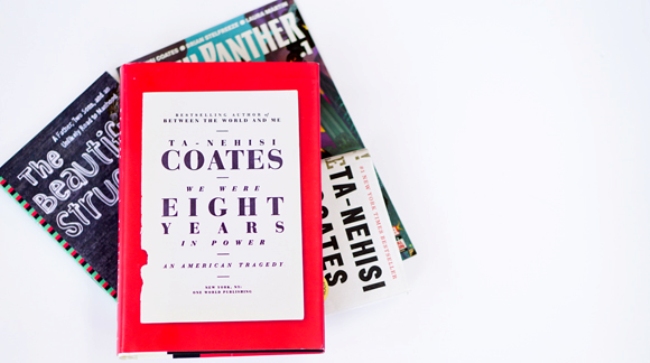 For years to come, scholars will look back on the 8 years of Barack Obama's historic presidency. There's so much to reflect on and consider. I suspect history professors will cover extended units, if not courses, on Obama. I, on the other hand, study and teach courses focusing on black writers and African American literary histories. While Obama's presidency will no doubt come up in my courses, the 8-year run that I plan to devote attention to in my classes involves the work and remarkable reception of Ta-Nehisi Coates.

His book We Were Eight Years in Power: An American Tragedy will be released next month. The book includes eight main chapters of Coates's previously published articles in The Atlantic. Those essays are:

What really stands out about the book, at least for those who'd already read those pieces, are the short, opening reflective articles that precede each of the chapters. Coates looks back and comments on his experiences, thinking, and motivations at the time of composition and publication. The book closes with an epilogue, which was published as "The First White President."

The book, therefore, is a collection of essays and at the same time a mini-memoir of sorts. In the introduction, Coates reflects on a moment when he was out of work and at an unemployment office in 2007. Later in the book, he reflects on having lunch and cordial disagreements with the president at the White House in 2015. What a difference those 8 years were for him.

There's quite a bit along the road from unemployment office to private meetings at the White House. Coates presents extended commentary about the support and encouragement he's received from his wife, Kenyatta. I was especially moved in one passage where he writes, "All I can say is seeing Kenyatta remake herself from liberal arts savant to med student, and doing so in service of her own mission, has been one of the great pleasures of my life."

He writes about his experiences blogging about a variety of topics and studying the Civil War. He writes about the big questions that led him to various stories and about his personal perspectives shaped his work. For me, what was most fascinating was his extended, recurring points about his processes and efforts becoming the black writer he is today.