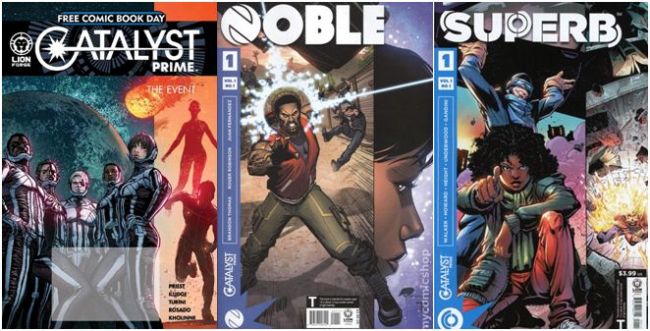 When I'm not at my day job at the university this semester, the plan is to coordinate a study group with high school students in East St. Louis. We'll concentrate on comic books -- Noble and Superb. What I'm doing is a pilot program, so for now, we'll have only 8 or so participating students. I'll expand the project on a larger scale down the line, when and if I can pinpoint more funding support.

Over the next few months, the students will each receive copies of Noble and Superb. Those comic books, by the way, are published by Lion Forge Comics, a company here in St. Louis, Missouri, which is right across the way from East St. Louis, Illinois. So we're in the position of supporting a local business with this project.

I've been calling the project a "study group" as opposed to a "reading group" because I want to encourage the participants to think about the books as collaborative efforts produced by writers, visual artists, colorists, and letterers. These comic books have a fascinating editorial story as well.

Noble and Superb are part of this larger Catalyst Prime Universe that charts adventures of a variety of different superheroes who have emerged in the aftermath of this major "event" when an asteroid was supposedly headed for earth. What's noteworthy from an organizational standpoint is that the teams of artists for the eight comic books in the series were assembled by editor Joseph Illidge.

There's been talk here and there about "diversity in comics" for years now. Illidge, however, really advanced the discussions by bringing together so many diverse contributors on the production of a common set of books. While the participating high school students will perhaps be less interested in those factors with the comic books than I am, it nonetheless makes me even more excited about the overall project.

I'll blog more in a couple of weeks as we get started.