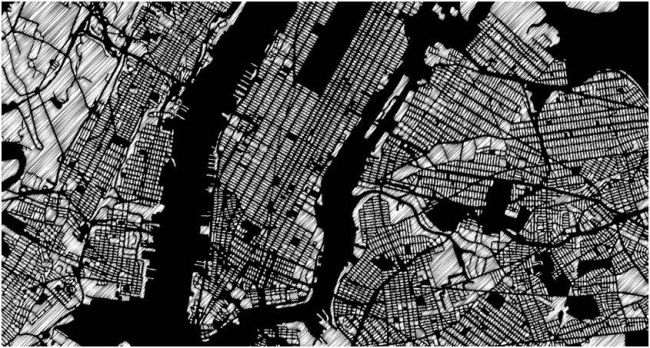 For his presentation at the Cultural Analytics symposium, Matthew Wilkens’s pointed out that “the rise in urbanization is one of the most striking and important demographic trends of the twentieth century.” Accordingly, his presentation used “data from the Textual Geographies project to assess the ways in which urbanization was reflected in (and shaped by) twentieth-century fiction in the United States, Great Britain, Germany, and selected other sites.”

The research that Wilkens is pursing interests us because of what urbanization and especially New York City mean for our studies. NYC has had an outsized influence in African American artistic production: novels, short stories, poetry, rap, and visual art. (No doubt, that’s for many other groups as well).

W. E. B. Du Bois, Langston Hughes, Zora Neale Hurston, Richard Wright, Ralph Ellison, James Baldwin, Toni Morrison, Toni Cade Bambara, Amiri Baraka, Jay Z, Nas, and many more are all linked to New York. The city is important as a geographical setting as well as a place of residence for many writers and artists.

Wilkens’s presentation reminded us of the importance of the Great Migration and its effects on African American literary compositions. Pinpointing when specific landmarks and locations became prominent in African American literature brings us closer to producing a comprehensive, evolving map about how migration patterns influenced characteristics of black writing. Even though the Harlem Renaissance can primarily be characterized as an urban movement, many of the writers during the period such as Hurston, Hughes, and Claude McKay chose the South as a recurring setting in their works while living in New York City. After the 1940s, black writers began to write about New York more frequently and incorporate actual landmarks in their stories.

Wilkens’s exploration of how urbanization was reflected in twentieth-century fiction gave us one model to consider when integrating data into literary studies—especially when thinking about black people’s transition from a primarily rural to urban demographic. In particular, we can mine compositions – novels, short stories, poems, rap lyrics, and speeches – for place markers in order to identify trends and emerging patterns among black writers.

Related:
• The Jay Z Dataset--presentation at the University of Notre Dame
Posted by H. Rambsy at 6:41 PM