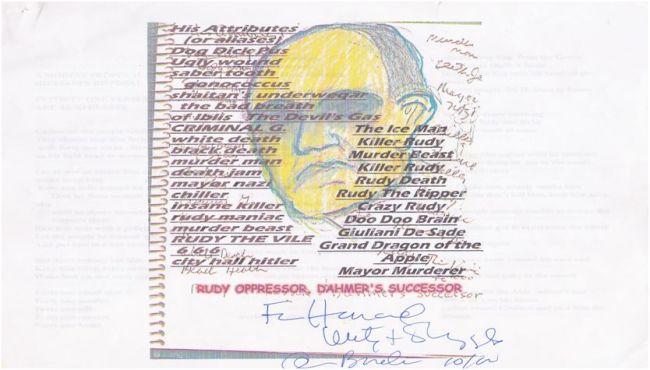 The other day, I was mentioning to William J. Harris, Tony Bolden, Micky New, Valerie Sweeney Prince, and James Smethurst that we might think of Amiri Baraka as an editorial cartoonist, among his many other roles. I meant that literally and figuratively. In the literal sense, Baraka sometimes drew caricatures of political figures. In the figurative sense, Baraka was frequently writing about ridiculing presidents and other politicians and chiming in on major news events.

I just recalled a reading Baraka gave in Salt Lake City, Utah, in October 2000. He was one of the keynote presenters for a conference on African American literature that I attended.

Baraka read a few different poems, but the one I remember most was his poem about then New York City mayor, Rudy Giuliani. The piece was entitled, "A Modest Proposal for Giuliani's Disposal  / in forty one verses which are also curses."  The 41 was a reference to the shooting death of Amadou Diallo. Police shot at the unarmed Diallo a total of 41 times, striking him with 19 bullets.

Like so many of poems directed at politicians, Baraka's poem was brutal. The piece offers numerous suggestions for how people might assault Giuliani. For instance:

Let them each Beat him
on his two faces,
Forty one whacks in forty one
places.

Prior to the reading, Baraka said that he believed that the "curses" he placed on politicians worked, which was why he decided to read this poem again at the event.

After the reading, he sold copies of the poem, and I purchased one. Baraka autographed it "Unity and Struggle."  What I noticed when he gave me the piece was that he had drawn an image of a grimacing Giuliani on the cover. The image was beneath a list of aliases for Giuliani, which included:

Baraka's rundown of artful and deliberately comical, offensive insults was a crucial element of his work. In retrospect, the illustration on the cover represented a glance of the poet's forays into editorial cartooning.