Cornelius Eady, the poet as storyteller 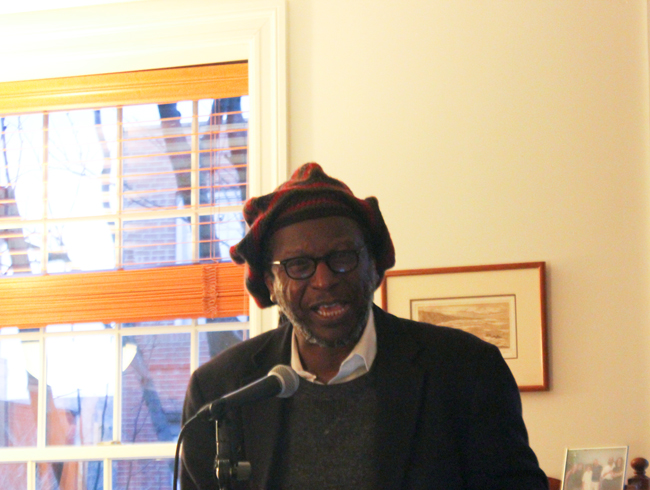 When he's not fulfilling duties as part of the Cave Canem Foundation, which he co-founded with Toi Derricotte in 1996, when he's not tirelessly providing blurbs for volumes of poetry, when he's not working with students at the University of Missouri, then Cornelius Eady might have some time to write a few poems.

I've read and written about Eady's poetry for years now. Given some of my projects, I've been especially haunted by his book Brutal Imagination. I've caught Eady reading works at a few different gatherings, but I was especially pleased to catch him reading at William and Susan Harris's home in Brooklyn on the evening of March 11.

Eady read three poems, "The White Couch," "Poetry," "I'm a Fool to Love You." Taken together, his style of delivery on those works reminded me about his talents as a storyteller. You might gather that he's a storyteller by reading the poems on the page, but it's what he does live, during a reading that really confirms his gifts for telling stories.

As Eady reads, he modulates his voice. He takes on and sheds the voices of different people/characters. He describes people's actions and movements. His pace changes. His tone shifts. His volume shifts. He even whispers various words and passages, prompting the audience to lean in to listen.

He introduces the poem "I'm a Fool to Love You" by noting that it's a story that his mother shared with him. He presents "The White Couch" and "Poetry" as stories or recollections about something that happened. It's worth viewing Eady as a storyteller too because of the lessons being presented in the pieces.

The close of "I'm a Fool to Love You" is especially powerful:


This is the way the blues works
Its sorry wonders,
Makes trouble look like
A feather bed,
Makes the wrong man's kisses
A healing.

Hold up. The blues, he says, makes trouble look like a feather bed. Whew. I want you to know that he took his time when he said those words. By the the time he reaches those lines, you know that everything before was leading to this moment. The story and the poem are about explaining exploring the blues. At the same time, the story and the poem are about understanding why this woman chose this "strange and sometimes cruel man."

Opening with that mystery of why that woman or any woman would choose that kind of man is what makes that poem a captivating story. It also works because of how Eady sets it up, I'm passing along a story that my mother told to me when I asked her why she was with my father. So many of us know about that, right? A story your mother told you. It's no small coincidence that one of the most popular all-time African American poems involves precisely that, a mother talking to her son by way of Langston Hughes.

Eady's "I'm a Fool to Love You" extends Hughes's "Mother to Son." Where Hughes takes on the persona of a black woman telling a story to her son, Eady blurs the lines in some ways. Early on, he goes "My Mother would tell you, if she could," and then he proceeds to tell us what "she would tell."

It's a poem, no doubt, but it's something else. It's Eady passing a story along, passing something he's heard that worth remembering. He's passing along something to us to pass along to someone else.